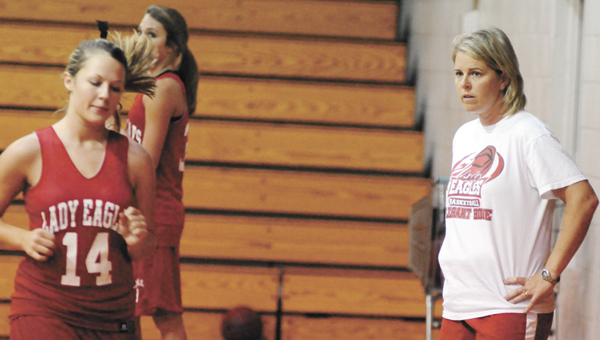 The only thing that is different on this year’s Pleasant Home Lady Eagles varsity basketball team is the number of seniors it has.

PHS has all of its players returning from last year’s team, and the Lady Eagles hope their experience will be the difference this season, girls basketball coach Kelley Garner said.

“We hope to be more experienced in every position,” Garner said. “We’ve got quite a bit of game-time experience other than my freshmen. The girls have been practicing about three weeks, and the effort’s been really good and the attitude has been really good.”

PHS will compete in Class 1A, Area 2 with rival Florala, Geneva County and Kinston in area play, which begins in January.

Garner said she wants the team to be competitive in the area.

“We want to stay injury-free,” she said. “That would be very important for us.”

When asked who she thinks will be the toughest team, Garner went straight for the one that forced her team to have to travel last season for the sub-region tournament, where the Lady Eagles fell to Brantley to end their season.

“I’d feel like it would be Florala,” she said. “They beat us last year in a barn-burner in a last-second shot. We’re going to try and come back and redeem ourselves this year.”

The Lady Eagles’ first contest against W.S. Neal this Friday has been canceled, and the girls will not have a game until after the Thanksgiving holidays, where they will begin with Straughn and Andalusia that week.

Garner said a goal this year is to win the area tournament.

“Everybody wants to be state champion,” Garner said. “We want to be, of course, area champions and host the area tournament. That’s our first and foremost goal.

“We’d like to make it back to the regional tournament,” she said. “It’s been a couple years since we’ve been there. So, we’re due to be back there. I think that this will be the group that can get us there. Mainly, we want to improve each and every game.”