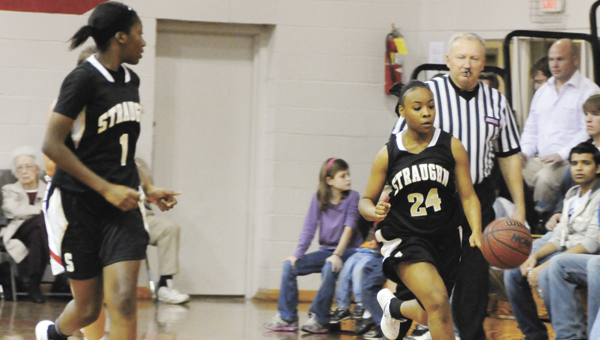 Jacie Williamson and Brittany Driver had 16 points each, and Katelyn Kinsaul chipped in 14 for SHS.

“I didn’t think we came out with very much intensity, but I think we held them to six points in the second half, and I was real pleased with that,” SHS coach Scott Kinsaul said. “With this being Pleasant Home’s first game, you could tell they’re going to be a good basketball team. We had the advantage of playing five games already.

“They’re going to be all right,” he said.

The Lady Eagles kept pace with the Lady Tigers in the first period.

The Lady Tigers strong inside game prevailed, and SHS took a 19-10 lead after the first period on a Kinsaul steal and lay up.

Williamson paced the Lady Tigers in the second period, netting eight of her 16 points to hold Straughn to a 35-20 lead at half time.

Pleasant Home’s inside game was on fire at times with the help of Ashley Williamson at point guard. Williamson found Raven Woods in the paint to help the Lady Eagles edge Straughn’s lead to 19-12 early in the second period. Williamson added a lay up and Woods scored off an Erica Bullard pass to make the score 25-16.

Kinsaul said giving his girls some rest over the holiday helped.

“We had a good practice (Monday),” he said. “I’m really trying to get them to focus hard on every practice and every minute of every game.

Driver added six points in the third period to help the Lady Tigers take a 43-24 lead going into the fourth period.

SHS then outscored PHS 8-2 in the fourth.

“I thought we looked real good. I thought we played well in the first half,” PHS coach Kelley Garner said. “Straughn was on fire. They hit everything the shot it seemed like. I thought we did well on beating their press. With it being the first game, obviously we saw a lot of things we can work on.

Raven Woods led the Lady Eagles with 12 points, and Mary Schwartz had four.