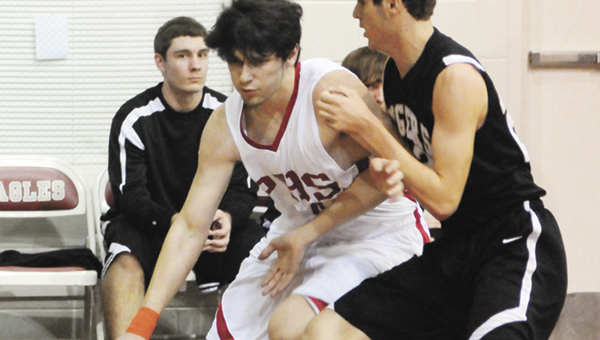 The Eagles pressed the Tigers throughout the contest, but SHS kept up with its fast-paced play.

Straughn came out in the third period, and outscored the Eagles 15-5 to trail 38-35 going into the fourth period.

PHS settled down, and utilized its size in the paint to net key rebounds late and put backs.

“It’s a win. A frustrating one,” PHS head basketball coach Jerry Davis said. “I think we played decent in spots.

“They (Straughn) played hard. They played hard,” he said. “Give them credit. We hung in there, and we got it in the end. We made it hard on ourselves.”

The Eagles will travel to play Andalusia on Thursday night in regular season action. Straughn travels to Florala on Friday night.

The Eagles jumped out to a 7-2 lead early in the first period on a 3-pointer by Davis, but Straughn answered with a tres by Brandon Vierling to bring the game at 7-7.

JD Driver then answered with a 3-pointer to put the score at 12-10, Eagles advantage.

Powell added a lay up, O’Neal made a put back and Davis hit a lay up on turn over to cap a 6-0 Pleasant Home run late in the first period.

The Eagles then went on to outscore Straughn 13-8 in the second period to take the 13-point lead at half time.

Straughn’s 15-5 outscoring of Pleasant Home in the third period began with a 3-pointer, and then Jordan McLelland added the back-end of a free-throw to cut PHS’ lead by 10 at 34-24.

Avery Driver got a steal, and passed to JD Driver to make the contest an 8-point game at 34-26.

After a Jeffery Slaughter jumper to bring the game back to 10 points, McLelland nailed a jumper and JD Driver hit a 3-pointer to give the Tigers a 5-point deficit to the Eagles at 36-31.

Avery Driver scored the last four points in the period for the Tigers.

“We worked hard,” SHS head coach Rusty Andrews said. “The effort was fantastic, especially for our first ball game. We just need to learn to play a little defense.

“We got shots, but we just didn’t make them,” he said.

The game remained tight in the fourth period, but Davis’ shot-making abilities pulled the Eagles through. He scored the team’s first six points in the period to go on a 6-0 run.

Avery Driver answered with a 3-pointer and Straughn trailed 50-45.

Pleasant Home then outscored the Tigers 10-2 to come out with the win.