Did you see the Osprey? 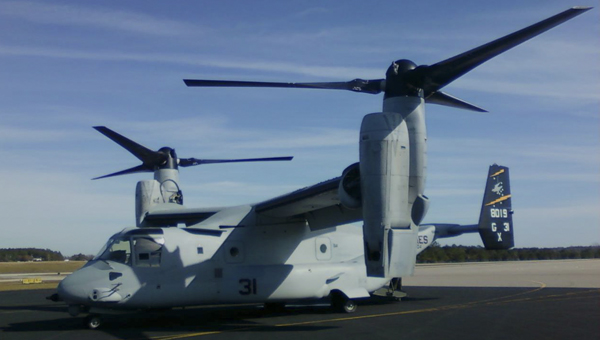 This past Saturday, a Bell Boeing V-22 Osprey stopped here in Andalusia to refuel. The aircraft was on its way from Corpus Christi Texas to its home base in North Carolina. This particular V-22 is property of the U.S. Marines. The flight crew was complimentary of the local airport and facilities, and said they hope to come back to the airport again in the future.  The aircraft received 1,236 gallons of jet-fuel.  The South Alabama Regional Airport Authority has a Department of Defense contract to provide refueling services to government aircraft.

The Bell Boeing V-22 Osprey is an American multi-mission, military, tiltrotor aircraft with both a vertical takeoff and landing, and short takeoff and landing capability. It is designed to combine the functionality of a conventional helicopter with the long-range, high-speed cruise performance of a turboprop aircraft.