Straughn won its first game of the season on Thursday night with a 67-47 victory over Kinston in the Tigers’ Christmas Shootout Tournament.

New Brockton played Pleasant Home close, but the Gamecocks prevailed with a 55-50 win in the first game of the day.

Red Level fell to Georgiana 72-50, as the Panthers proved too much for RLHS.

Straughn will play Georgiana tonight at 7:30 in a rematch of Tuesday night’s game, and New Brockton will play Kinston at 6.

Straughn’s Hobie Hughes led the Tigers with 26 points, and JD Driver added a double-double with 14 points and 10 steals in the win.

“We didn’t shoot the ball real well from the outside,” Tracy said. “We limited turnovers, and they were very limited compared to the other three games. Defensively, I thought we played one of our better ball games, too.”

For Kinston, M. Davis led the Bulldogs with 15 points.

In a close contest, Pleasant Home just couldn’t get the win against a tough New Brockton team, losing 55-50 in the first game of the Straughn Christmas Shootout Tournament on Thursday night.

Then, the Eagles outscored New Brockton 15-14 in the third period, while the Gamecocks outscored Pleasant Home 17-15 in the fourth.

Pleasant Home had an opportunity to win, but failed to make three free throws at the end.

“We had our opportunities,” said PHS head coach Jerry Davis. “We missed three free throws when we were down by three. It was a good game, though. I thought we executed well sometimes, and other times we slept. We’re not a real experienced team. We only have a few who started last year. But that’s why we play in a tournament – to get experience and to play some other good ball teams.”

Lance Davis led the Eagles with 25 points, while Chris Green led the Gamecocks with 21 points.

Georgiana was just too much for Red Level as the Panthers went on to win 72-50.

Georgiana struck out to a 17-10 lead in the first period. Red Level made it a closer game in the second period, outscoring the Panthers 12-11 to make the score 28-22 at the break.

Georgiana came out of the locker room on fire in the third, putting up 25 points to the Tigers’ 13. 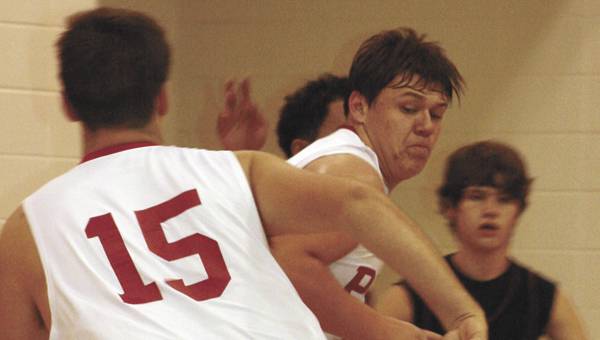