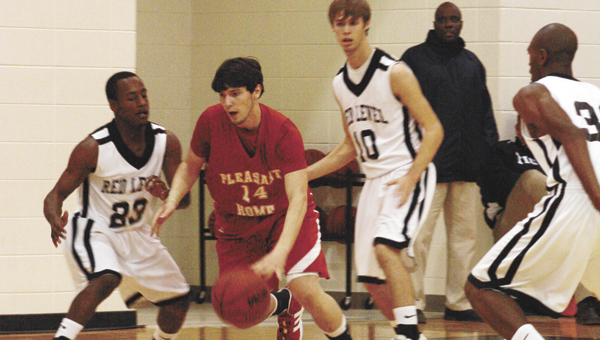 Red Level held on in a clawing match until the final buzzer sounded Friday night, as the Tigers beat Pleasant Home 41-39.

In the final game of the night, Straughn fell to Georgiana 53-38.

Today’s games will start with Pleasant Home and Kinston at 1 p.m., and RLS and SHS will play afterward at 2:30. The tournament championship between New Brockton and Georgiana will be at 4.

The Eagles and Tigers were tied at 11-each at the end of the first period.

The Tigers scored 10 points in the third, while the Eagles put up eight points.

The Eagles put up 14 points on the board in the fourth, but it wasn’t enough to top Red Level’s 12.

The game was tied 35-all with 2:45 left on the clock, Pleasant Home went up by two and Troy Nolen hit a 3-pointer to put the Tigers up by 1.

Both teams managed to add two more points each.

“We had our chance,” Pleasant Home head boys basketball coach Jerry Davis said. “They made their shots, and we didn’t. I felt like we handled the pressure well. This is one of the better ballgames we’ve played this season. If we play like this, we’ll continue to improve.”

Red Level head coach Allen Catrett said he was “happy with a win.”

“But we’re playing against perfection,” he said. “We’re not playing as hard as we need to be playing. We had too many defensive breakdowns.”

A. Rich and L. Curry had 12 points each for the Panthers.

Straughn and Georgiana were tied 12-12 at the end of the first period, and the Panthers held a 26-20 lead at half time.

The Panthers led 39-30 at the end of the third period.

Straughn won its first game of the season on Thursday night with a 67-47 victory over Kinston in the Tigers’... read more