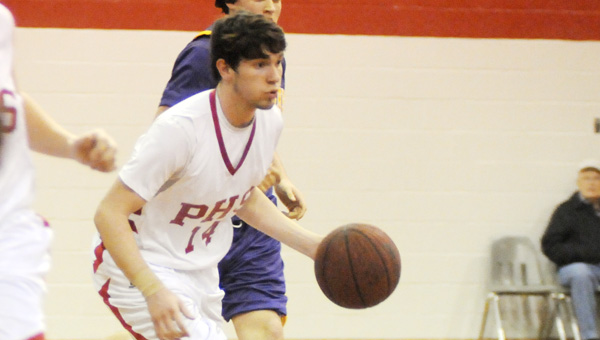 PHS will play host to Excel on Friday night. The B-team will get started at 4 p.m.

Lance Davis and Jeffrey Slaughter finished in double figures for the Eagles, as PHS took control early in the win.

Davis drained 15 points, and Slaughter had 10 points in a game where the Eagles led 17-3 at the end of the first period and 32-8 at half time.

“It was a sloppy game,” PHS head boys basketball coach Jerry Davis said. “I’m not sure what you can say, but only that you can take it for a win.”

Kaleb Powell, who had six points, scored four of his points in the first period.

PHS led 8-2 at the mid-point of the opening period on a Hunter Odom put back. Powell added a drive to help PHS take a 10-3 lead.

PHS only allowed five points in the second period, as the Eagles rolled getting jumpers only feet away from the basket.

With a few minutes left in the half, PHS went on a short 4-0 run on a Slaughter drive for a foul and two free throws made by Jon Cole Chesser.

Leading 32-8 at half time, the Eagles outscored the Bulldogs 12-5 in the third period and 6-5 in the fourth.

Chesser and Ty Bass added five points each for PHS.

Ashley Williamson and Mary Schwartz led the Lady Eagles with 19 and 9 points, respectively.

The Lady Eagles spread it out on offense, executing a well-balanced inside and perimeter game throughout the contest.

PHS head girls basketball coach Kelley Garner said it was good to see some “intensity” on the court.

“We played good defense the whole night,” Garner said. “We started the game out with a lot of intensity.

“We had a good, solid ball game all the way around,” she said.

The Lady Eagles pranced out to an 8-1 lead with 3:22 in the first period on a Williamson 3-pointer.

Williamson then got a steal and passed the ball to Byrd for an easy bucket. Erica Bullard then got another steal to Byrd to end a 7-0 run.

Williamson got two 3-pointers back to back at the start of the second half to give the Lady Eagles a 33-point lead.

The Lady Eagles kept flushing the ball down the middle for easy buckets and completed a 14-0 run on an Abigail Kelley front-end shot on a pair of free throws.

PHS led 55-10 at the end of the third period, and came close to having a second-half shutout, but the Lady Bulldogs got in an open lay up on transition.

“The girls played hard, and they gave a lot of effort,” Garner said.