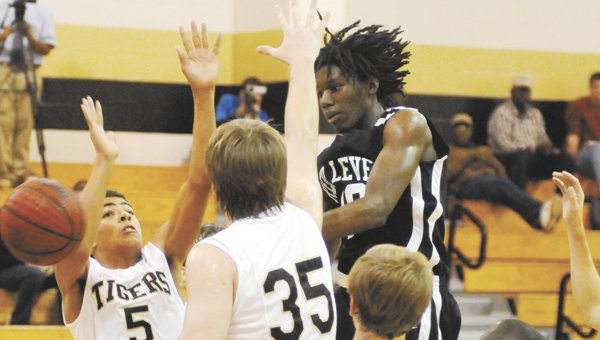 “We came out with a lot better intensity than what we had the last week,” RLS head boys basketball coach Allen Catrett said. “We stayed into a better defensive effort.”

RLS only allowed seven points to have a 14-7 lead going into the second period.

Straughn bounced back in the second period, where it outscored RLS 12-10 to trail only by five at 24-19 at half time.

Red Level took a 22-11 lead on a KJ Lawrence pass to James Feagin on the inside in the second period.

Straughn gave away 27 turn overs for Red Level in the loss, and missed 14 shots from the line.

Red Level led 39-28 at the end of the third period, and the game never got any closer than six points in the fourth period, despite a last SHS defensive effort.

“We turned the ball over (too much),” SHS assistant coach Marc Tracy said. “You don’t have to take away half of those turnovers and make five or six free throws and you win the game.”

Lawrence led RLS with 18 points, and Nolen chipped in 15 points.

Straughn’s JD Driver had 17 points, and Hobie Hughes had 16 points.