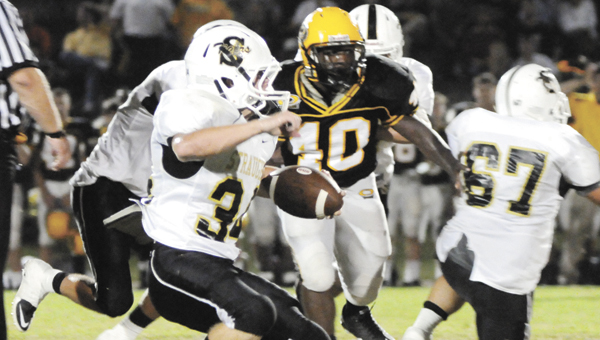 Straughn will play in Class 3A, Region 1 this season with the likes of Bayside Academy, T.R. Miller and Opp. | File photo

In a little more than seven months, Straughn and Red Level will face some new, and some familiar football teams this year.

SHS and RLS recently released their season schedules for 2012, and both teams enter the season in different classifications.

Straughn dropped back down to Class 3A, Region 1, while Red Level made the drop to Class 1A, Region 2.

“It’s exciting because it’s different,” Ingram said. “All of our area is different. There are some familiar faces with Pleasant Home, Florala and Brantley.”

Ingram said it will also be good to play other teams in the region like Kinston, Georgiana and McKenzie.

“We’ve played them before, but it’s been years since,” he said. “We are looking forward to the area because there are going to be some pretty good rivalries.

Ingram said week one’s contest against Choctaw County has been agreed upon by both coaches, but the contract hasn’t been signed.

Straughn football coach Trent Taylor said the competition in Region 1 play is always going to be tough, no matter your classification.

“Ours is no different,” Taylor said. “You’ve got Bayside Academy, who finished in the second round last year (2011) in the playoffs, and Opp won their region last year.

“T.R. Miller, they’re there every year,” he said. “It’s a real strong region. W.S. Neal is getting better and better.”

Straughn will kick-start its season with a jamboree game against rival Red Level, and its regular season will begin with arch rival Andalusia in week one.

At the mid-way point of the season, SHS will visit defending Class 2A state champions Elba.

The latter half of Straughn’s season includes road region trips to Bayside Academy and Opp. SHS will play Excel and T.R. Miller at home in weeks seven and eight, respectively.

“If we’re fortunate enough to make the playoffs, it will give us a week to heal up a bit,” he said.

The last time Straughn had an open week was during Taylor’s first year at the helm of the football program in 1990.

In addition to Bayside Academy, T.R. Miller, Excel, W.S. Neal and Opp, Straughn will play Cottage Hill Christian Academy and Southside-Selma in its region this season.