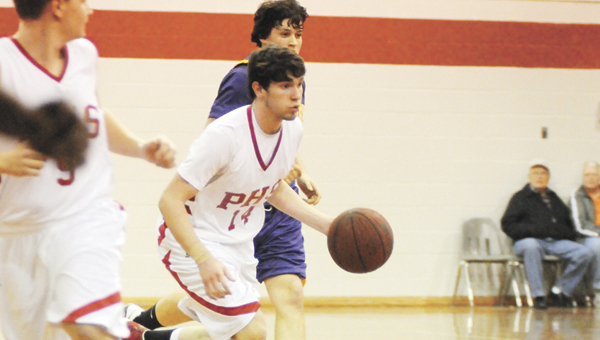 Pleasant Home’s Lance Davis drives down the court during an earlier contest this season. The Eagles will host Geneva County tonight for their homecoming game. | Andrew Garner/Star-News

Pleasant Home’s boys and girls basketball teams will vie for the area lead tonight in their homecoming match up against Geneva County.

PHS began its area play this season against the Bulldogs on Jan. 3. The boys cruised to a 66-31 victory thanks to three players with five assists each that opened up the Eagles’ inside game for the win. However, the girls didn’t fair that well at all, falling to the Lady Bulldogs 52-50.

PHS girls coach Kelley Garner said hopefully the team will feed off of the big crowd that will show up for the game tonight.

“It’s going to be a big game for us,” Garner said. “They have three good players and two that contribute. They ave a solid team. They’re very aggressive and very quick.

“We’re just going to have to come out focused, which is sometimes hard to do during homecoming week,” she said.

PHS boys coach Jerry Davis said that concentration has been a big key leading up to the game.

“But, that’s typical with athletics,” he said.

Davis said the team hasn’t been shooting well, but has made up for the lack of offense on defense.

“We have shot the ball very poorly since we’ve come back from the break even in the shootout,” he said. “Right now, we’ve got Tyler Worley with a rolled ankle. We’re expecting him back sometime next week. Hopefully, we’ll get some scoring in from him.

“We’re having to play a freshman in Jon Cole Chesser — he’s doing a great job,” he said.

The Eagles are coming off a Tuesday night area sweep over rival Kinston.

Garner said a big key in tonight’s game will be “controlling the boards (rebounds).”

“We allowed them (GCHS the first time) to get second shots,” she said. “We’re keying on controlling the boards and hopefully giving them only one shot.

“That was just a huge factor in the game over there,” she said.

For Davis’s team, playing “decent defense” is the big key.

“If we can get an inside game again and play decent defense, we should be OK,” he said. “They’re going to be tough, and they’re going to be motivated. If you win out, then you host the area, and that’s what everybody is looking at accomplishing.”

Like at many sporting events, the crowd can become a home team’s extra “man.”

Garner said the crowd will be essential in tonight’s games.

“We just want to encourage alumni and Eagle fans to come out, and pack the gym and get behind us and be our sixth man and help us pull out a victory,” she said.