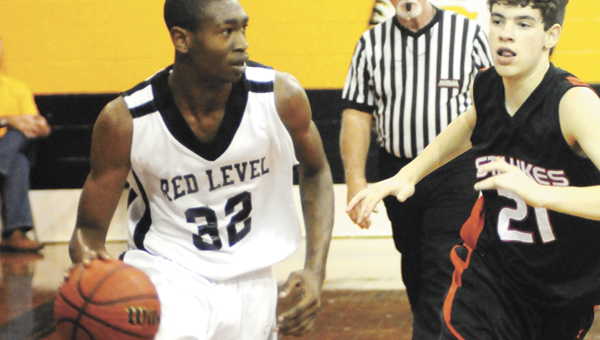 Red Level’s James Feagin played in his first game on Friday night since his injury on Dec. 20, 2011. | Andrew Garner/Star-News

It only took Red Level’s James Feagin 25 days to return to the hardwood after suffering an injury that could have kept him out of the rest of his senior year — a feat he and his mother attribute to the “power of prayer.”

Feagin returned to action on Friday night against Samson, where he helped lead the Tigers to an area victory. Feagin scored four points for RLS and said he was apprehensive on the hardwood.

“I was nervous and scared,” Feagin said by telephone on Monday.

He had reason to be.

When Feagin landed on his neck and head during that game, he suffered a concussion and had a ligament injury.

For the past few weeks, Feagin was seen sitting with his team behind the bench with a neck brace — a place he said he didn’t want to be.

“I was anxious, and wanted to get out there and play,” he said.

On his recovery, Feagin said it was “easy-going” and that the neck brace was “irritating.”

Feagin said it was because of the “power of prayer” that got him back on the court to play the remainder of his senior season.

Feagin plans to attend LBWCC next year, and is the son of Melonie and James Feagin Sr., and will try and help his team take the area lead tonight when the Tigers host Elba. Tip off for the B-team is at 4:30 p.m.