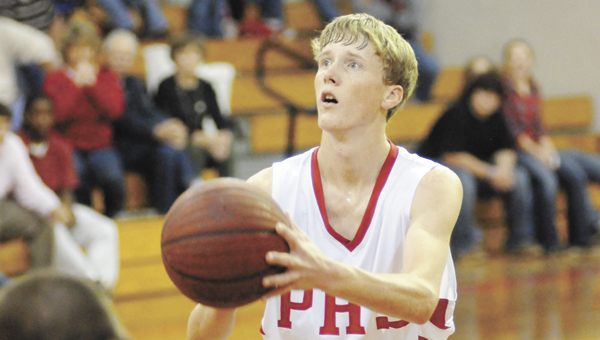 On a green arm band dangling loosely on Kaleb Powell’s right wrist, are the words “No Matter What.”

And that’s what the Pleasant Home senior guard is living by as he plays basketball — the sport he loves — while his father, Johnny, watches from Heaven.

Johnny died of cancer on Christmas Day, and urged his son to never give up on the court before he passed away.

“He told me to play hard, and give it my 100 percent,” Kaleb said. “You’re not supposed to quit, like this arm band that says ‘No Matter What.’ You’ve got to go all four quarters until it’s done.”

In recognition for his bravery and inspiration after his father’s death, Kaleb was honored with the T.J. Fleming award at last night’s Andalusia Chamber of Commerce banquet.

Fleming died from a rare form of cancer in his saliva gland in May 2010. He was a former Florala High School baseball player and was a member of the LBWCC’s Saints baseball team.

“The first time I picked up a basketball and started dribbling was when I started playing,” he said.

And the experience shows out on the court, as the senior plays point guard for the Eagles.

When he’s not giving the ball to another player for a shot, Kaleb is seen driving down the paint in hopes of a bucket.

Kaleb said his earliest memory playing basketball came when he was 3 years old, playing with his dad and brother Jared.

When asked how he’s been able to cope with playing basketball after his father’s death, Kaleb said that he’s confident he’ll “see him again” one day.

“It’s hard, but you’ve got the assurance that you’re going to see him again,” Kaleb said. “It’s hard to know that he’s not going to watch me play, but I take the fact that God could’ve taken somebody else that might not have known they were going.

“I kind of have no worries, but emotionally, it messes with you a little bit,” he said. “My father told me before he died to ‘play hard, and play for me.’ Some nights I might feel down, but I always remember what he told me, and I just keep pushing and striving.”

The fight to keep pushing and striving, along with is faith in God, are a big part of how he got back in the normal rhythm of playing basketball again.

“He said ‘don’t worry about me, you’ll have a guardian angel out there with you on the court,'” Kaleb said. “‘I’ll be watching down on you and make sure you don’t make any mental mistakes on the court.’

“I have him in my heart, and that way, I can feel it when I make a mental mistake and how he wouldn’t want me to do that,” he said.

Kaleb played his first game after his father’s death at the Alabama-Florida Shootout last December.

He admitted it was hard to play the game he loves without his father in the stands, but said that he can always hear his father yelling in the crowd, whether it was because of a good play, or a bad play.

“It was hard,” he said. “He made a few games in between that time (last year) and now, knowing that when I look up at the stands, I could always hear him holler.

“I couldn’t hear that, so it was a little different, but I pressed through it,” he said.

Kaleb is the son of Kristi Powell, and he plans to attend LBWCC in the fall and will transfer to Troy University after he gets through with is basics.

Andalusia’s Alectricia Barnes drives down the court during her team’s Tuesday night win over Straughn. The Lady Bulldogs must beat... read more