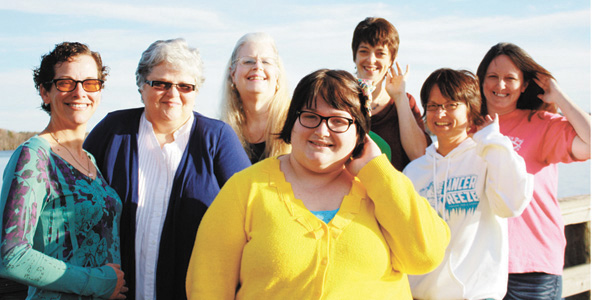 Among those electing to shave their head if Cancer Freeze raises more than $3,000 this year is (in no particular order) Bekah Harreslon, Marsha Phillips, Marsha Garnder, Nicole Crockett, Lisa Spear, Melanie Russell and Jennifer Davidson. Not pictured are Gerry Kimbril, Angie Highlander and Jan Allred.

Those involved with this year’s Cancer Freeze event believe in fundraiser’s message with fiber of their being and every hair on their head.

And they’re willing to prove it by shaving it all off if the group raises more than $3,000 this Saturday.

Organizer Jennifer Davidson said the group is willing to go to any means to help the families of Cooper Sasser, Ayla Powers and Michael Harrison fight their battle against cancer. Monies raised over expenses will be divided among the three.

When Davidson told others that she would shave her head bald if the fundraising threshold was met, others quickly followed suit.

Each said Monday they have a reason for doing the unthinkable for a good cause.

For Marsha Phillips, it’s because of her mother and sister.

For Marsha Garner, it’s for herself – a cancer survivor – and her sister.

For Nicole Crockett, it’s because God laid it on her heart to put a smile on the face of those battling the disease.

“Because I’m crazy, that’s why,” she said; however, Davidson said Harrelson was the first to sign on once she heard what the plan was.

Momentum for this Saturday’s fundraising event is growing. Davidson said she arrived home after church Sunday to find a handwritten note and $20.

“It said, ‘Jennifer, I’ve always loved your hair short,’” Davidson said. “People have been fantastic to give.”

Davidson said a “Shave your lid for a kid jar” will be on hand for donations.

On Monday, Melanie Russell’s husband, Kelby, elected to join the group, although he will forfeit his beard, not the hair on his head.

“This is a fun way for us to show how much we really want to make this year’s event a success,” Davidson said. “The more money we raise, the more we can help, and that’s what it’s all about.”

As for Davidson’s husband Caleb – his lid is already shaved, she said.

For those wishing to participate, donate or sponsor, contact the Davidsons at 850-978-3726, by e-mail at calebdavidson@yahoo.com or visit the organization’s Facebook page.