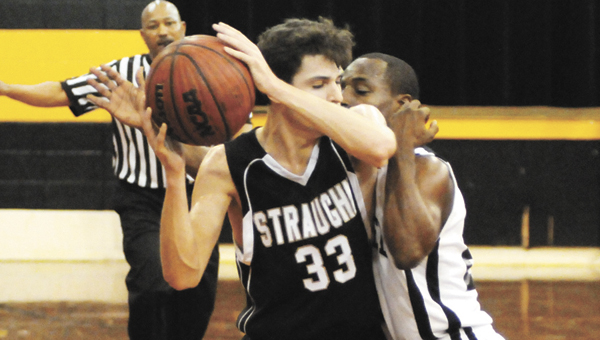 Straughn blew a 15-point lead to Red Level, but held on late making clutch shots to earn a 65-63 victory on Tuesday night at RLS.

“It’s called weathering the storm,” SHS coach Rusty Andrews said to describe his team’s win. “We played well, and then we had to play thorugh a couple questionable calls, but we made free throws down sthe stretch and took care of the basketball when we needed to.”

Red Level’s Dee Tolbert passed to Troy Nolen on the other end for a 3-pointer and RLS trailed 51-39 going into the fourth period.

Straughn’s Avery Driver got a put back to give the visiting Tigers a 53-39 lead.

Nolen then hit a long trey and SHS took a time out with 6:25 left in the game.

Hughes then drove to the basket and got a 3-point play to give the Tigers a 56-44 lead.

Red Level then went on a 7-0 run thanks to a couple Straughn turn overs and James Feagin’s put back and KJ Lawrence’s steal for a drive and a crucial 3-point play to give RLS a 56-51 deficit.

Lawrence cut the game to three points when he made two free throws after getting fouled on the other end with 4:05 left.

Feagin tied the game on another 3-point play after Raheem Bullock saved the ball from going out of bounds on transition with 3:31 left in the game to end a 20-5 run.

Straughn then took a 58-56 lead after Avery Driver’s two free throws, and Hughes got the front-end of a pair to give the Tigers a 59-56 advantage.

After JD Driver and Hughes made one free throw each to give SHS a 63-58 lead, Tolbert found Nolen for a trey and RLS trailed 63-61 with 1:10 to go and took a time out.

Feagin got a nice block on Scott at the offensive end for SHS, and Hughes got caught traveling that resulted in Red Level (18-10) tying the game up again at 63-all with 13.1 seconds left in the game.

“It’s always hard to dig yourself out of a hole to finish the ball game,” RLS coach Allen Catrett said. “We’ve got to make sure we have good shot selection.

“Toward the end, we had good momentum,” he said. “We finally got caught up, and then a couple possessions we take bad shots and we don’t put it where it needs to be.”

The game winner came with less than 5.9 seconds left on a simple inbounds play, where Hughes found Avery Driver under the basket for an easy bucket.

“That’s a regular play,” Andrews said about the inbounds play. “They didn’t run it the right way, but it was kind of run the way it was suspposed to run.”

Hughes scored 16 points in the first half, and led SHS with 28 points and seven rebounds on Tuesday night. Avery Driver chipped in 22 points and was 8-of-9 from the field.

Red Level shot seven 3-pointers in the first half, but trailed 18-15 after the first period and 31-28 at half time after JD Driver’s 3-pointer with time running out.

Red Level’s girls came out on a tear against Straughn, taking a 4-0 lead early and led 12-10 after the first period.

However, Straughn’s experience won out as SHS outscored RLS 21-3 in the second period to lead 31-15 at half time.

“We’ve got to quit getting off to a slow start,” SHS coach Scott Kinsaul said. “I’m proud of how they played in the second and third quarters.

“Everything we’re doing is to get ready to play Ashford (in the area tournament),” he said.

“The past two weeks, we’ve seen a lot of maturing from our girls,” she said.

Shelby Holley had 10 points, and Brandi Hendrix had nine points for Red Level.

Straughn’s varsity boys and girls had the same idea when it came to how many points they were going to... read more