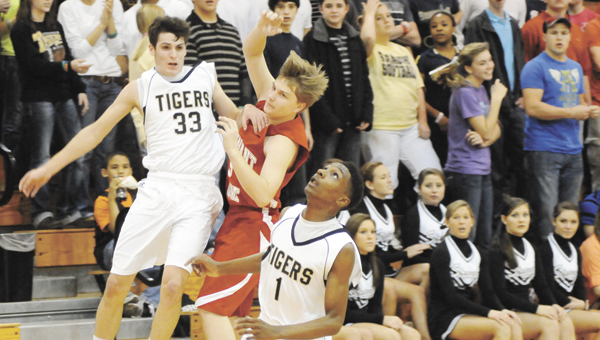 Straughn’s Avery Driver (33) and Brice Scott (1) go for the ball during action Thursday night. The Tigers beat the Eagles 64-50 in regular season action after going on a 25-0 run in the first half. | Andrew Garner/Star-News

Straughn’s 25-0 run in the first half propelled the Tigers to a 64-50 victory over Pleasant Home on Thursday night.

“We got took out behind the wood shed,” PHS coach Jerry Davis said. “There wasn’t much we could do about it. We said the wrong thing to daddy, and he came to whoop us.”

The Tigers got off to a hot start on their senior night, as senior guard Avery Driver converted on a SHS steal for a bucket.

Pleasant Home’s Lance Davis answered with a 3-pointer with 7:15 in the opening period and the Eagles would take their first of two leads of the game.

Avery tied the game up with 6:07 with a trey, and the Eagles went up 6-5 after Jeffrey Slaughter’s front-end free throw.

“When Avery gets off (to a good start) early, we usually play well,” SHS coach Rusty Andrews said. “The trick is us playing well the first three minutes of the ball game.

“I was proud of my seniors,” he said. “They did what they needed to on senior night. They took care of business.”

The Eagles took a time out with 5:15 left in the first period, and the Tigers pounced on PHS’ vulnerability.

JD Driver, cousin of Avery, drained a trey to give the Tigers a 11-6 lead, and Avery followed with a jumper from mid-range to force an Eagles time out with 4:09 on the clock.

Brice Scott, a fresh presence for Straughn, drained a pair of free throws, made a steal and scored on the other end, and executed a pass to Avery to help the Tigers take a 19-6 lead at the end of the first period.

Straughn’s Hobie Hughes, who had 17 points and six rebounds for the Tigers, got a put back to start the second period, JD got a 3-pointer and SHS led 24-6.

Hughes made it a 20-point game on a shot and Scott got a bucket on the other end of a steal to give the Tigers a 28-6 advantage with five minutes left in the first half.

Pleasant Home’s Josh O’Neal got a put back to end the Tigers’ massive run and Straughn led 34-15 at half time.

Given the huge deficit at half time and the run, Davis commended his players for not quitting.

“We could’ve rolled over and and packed it in,” he said. “Our kids fought back and played hard in the second half. We didn’t quit. That’s the biggest thing.”

Pleasant Home outscored the Tigers 12-10 in the third period, and put forth a good effort in the fourth to beat Straughn in the period 23-20.

Andrews said the crowd played a big part in the win.

“We were proud of the crowd we had (Thursday night),” he said. “They pulled us through.”

Straughn will visit Georgiana on Monday for its last regular season game.