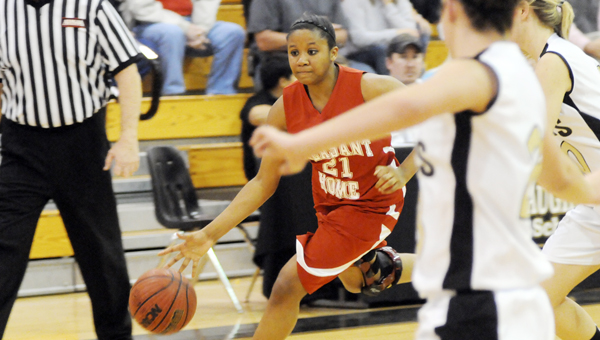 Pleasant Home's Raven Woods will try and help lead the Lady Eagles past a good Brantley team tonight in the Class 1A sub regional. | Andrew Garner/Star-News

Pleasant Home’s Lady Eagles will face a tough Brantley team tonight in the Class 1A sub regional, and girls coach Kelley Garner said getting off to a good start is essential.

“We’re going to have to play four full quarters,” Garner said. “The first five or six minutes are going to be huge for us.”

Garner said the team hasn’t had a good start to their ballgame the last few contests.

Pleasant Home lost to Geneva County in the Class 1A, Area 2 championship on Monday night, which forced them to have to travel to BHS.

“We’re going to have to be ready for their pressure,” Garner said. “We’ve been very successful with that, and I just hope we can carry that in the game (tonight).”

Since Brantley has four to five good shooters on their team, Garner said, the Lady Eagles have to make shots tonight.

“We’ve had some shooting woes the last two games,” she said. “A big factor is going to be on the defensive end. We have to cover all of those (shooters) and still stop their inside presence.”

Pleasant Home (14-6) will have to eliminate the second and third looks on the basket, Garner said.

“We’ve got to have a good start and control the boards,” she said.

As far as how the team is doing leading up to the game tonight, Garner said they’re “excited.”

“They realize that if we win, we move one and if we lose, we go home,” she said. “They’re ready for the challenge.”

Tip off tonight in Brantley is at 7.