RLS Tigers gear up for Wicksburg 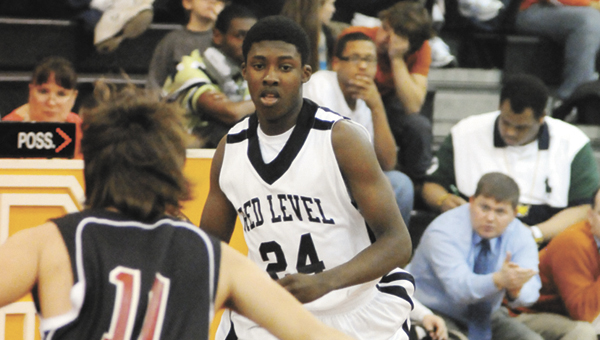 Red Level’s Spencer Stallworth dribbles down the court during an earlier game this season. The Tigers will face Wicksburg today at 1:30 p.m. at the regional tournament. | Andrew Garner/Star-News

Red Level will tip off against a well-balanced offensive team in Wicksburg today for the semifinals of the Class 2A South Regional Tournament in Mobile.

The Tigers enter the contest against WHS with a 22-10 overall record.

In all of his study of WHS, RLS coach Allen Catrett said he’s still trying to find a weakness.

“They’re a very balanced team,” Catrett said. “Everybody on the floor can score.

“They play very smart, they take care of the basketball and they rebound well.”

Tip off today is at 1:30 p.m. for the Tigers at the Mitchell Center on the campus of the University of South Alabama. The last time RLS made an appearance at the regional tournament was in 2010.

Wicksburg’s Diquan Fenn leads the team with 11.9 points per game, and Austin Sellers comes in a close second with 11.6 points per game. On the boards, Fenn averages 4.1 rebounds per game, whereas Sellers has 3.1 per game.

Leading in rebounds is Wicksburg’s Trey McNeal, a junior, who averages 7.5 rebounds per game.

WHS (25-6) has two senior starters in Gabe Richards and Cam Wiehe, who average below eight points per game each.

Four of Wicksburg’s losses this season have been to Class 2A’s Barbour County.

An achilles heel for the Tigers this season is drawing a deficit early in games and having to bounce back.

The most recent was last week’s 69-50 sub regional win over Flomaton.

RLS then went on to outscore the Hurricanes 22-1 in the fourth period on a 49-47 deficit after the third period.

“You don’t ever want to play from behind,” Catrett said. “With a team like Wicksburg, they take good shots, and they don’t rush anything.

“They pass the ball around until they get a good shot,” he said. “You definitely don’t want to play catch up with a team like that.”