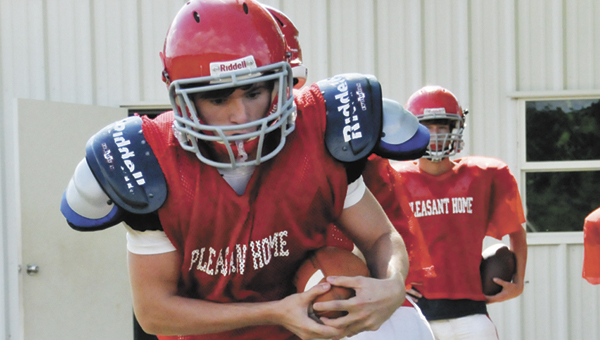 More than a week into Pleasant Home’s spring practice, Eagles football coach Cody McCain said he’s been pleased with what he’s seen so far from the boys.

The Eagles will end their practice on Wednesday, a day before their spring game at Florala.

“We had good numbers out early on,” McCain said. “Forty-five for the first day. Right now, we’re down to about 40. We hope we can keep all of them.”

In year’s past, McCain said the number ratio between linemen and skill set kids has been big.

Now, it’s the exact opposite, the coach said.

“We have 28 skill set kids,” McCain said. “We used to have more linemen than skill guys.”

One aspect of the game that’s made spring practice more exciting this year is Pleasant Home’s new offensive and defensive schemes, McCain said.

Now, the Eagles are running out of a spread offense with a running base. On defense, PHS is out of a 3-5-3 stack to allow more defensive back and linebacker play.

The spring game at Florala is on Thursday night, starting at 6.

Other than FHS and PHS, Zion Chapel will participate in the game.

Pleasant Home senior pitcher Emily Byrd was cleared to play Monday by her doctor. Byrd may get the chance to play... read more