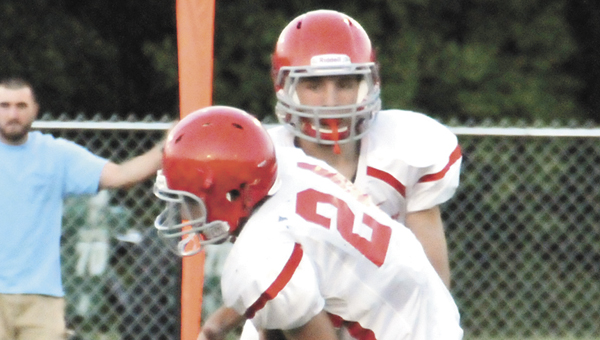 Pleasant Home has averaged around 35 players in its workouts so far this summer. | Andrew Garner/Star-News

The Eagles completed their sixth day of workouts on Thursday. Pleasant Home meets every Monday, Tuesday and Thursday from 5:30-7:30 at night.

PHS has around 38 players on its football team. Average attendance at the workouts has been right at 35.

“We’ve had great attendance,” McCain said. “We’ll look to add about probably close to a dozen (junior varsity) kids once schools start back. That’ll get our numbers for the total program up to the 40s, or maybe even 50s. We’ve got good numbers for us.”

This spring garnered a lot of excitement for the players heading into the summer, McCain said.

“The kids were excited after sprig and kind of liked the direction everything was going in,” he said. “We’ve had really good participation. Everybody’s spirits have been really good for the summer workouts.”

A big positive McCain said he’s seen with this bunch of players is their loss of weight and their height achievement.

“A lot of our linemen, who we were concerned about in the spring, some of those guys seemed to have slimmed up a little bit from spring to summer,” the coach said. “Some of those younger kids that are around 14 and 15 years old are getting to a growth spurt.”

One perk of the summer workout program is 7-on-7 tournaments.

Pleasant Home is set to compete in a four-team 7-on-7 tournament on Thursday in Elba.

After the tournament, PHS will resume workouts July 1-2, and will take the rest of the week off for the July 4th holiday. The Eagles will workout the week of July 8, have a dead week during the week of July 15, and then will go until the first day of fall football practice, Mon., Aug. 5.

Opp’s Saddle Club will hold another fun day on Saturday. Due to the excessive heat, the fun day will begin... read more