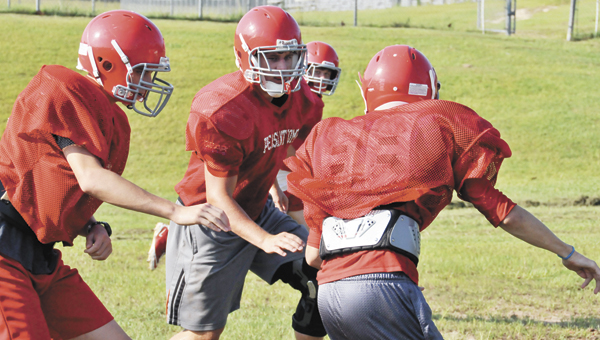 Pleasant Home had its best fall football practice on Tuesday as the Eagles get tuned up for their season opener at Cottonwood this week.

The Eagles are facing a CHS team who is potent on offense with Cody Gill at quarterback. Last season, Gill threw for more than 1,500 yards and 15 touchdowns.

PHS head football coach Cody McCain said preparation for the first game has gone on for quite a while, all summer, in fact.

“We were anticipating to play Samson and then following up with Cottonwood,” McCain said. “In both cases, we’re seeing more of a spread offense and two quarterbacks in a row that are good.”

Pleasant Home’s preseason contest against SHS was canceled because of bad field conditions at both schools.

To prepare for Cottonwood, McCain said the Eagles had to adjust to their opponent’s many weapons.

“Since the beginning of fall camp, we’ve been trying to prepare for these good passing teams right out of the gate,” the coach said.

McCain said the Eagles had to adjust its 3-5-3 defensive formation to cater more to the pass, including putting bigger players than smaller ones in coverage.

Tuesday’s practice couldn’t have come at a batter time, the coach said.

“The attention to detail was pretty good,” McCain said. “We’re past the point of teaching everything right now. We want to see it executed. We’re working toward a great game plan. The players have responded pretty well to that.

“From a coaching stand point, we’re trying to make sure we’re not leaving anything out,” he said. “In the same sense, we’re excited for the players and want to see how they respond. I think everybody’s excited and nervous at the same time.”

Kick off tomorrow night at Cottonwood is at 7.

The sun is just right, time for football

I’ve been waiting for about two months to write this particular column. It’s not that I’ve had writer’s block or... read more