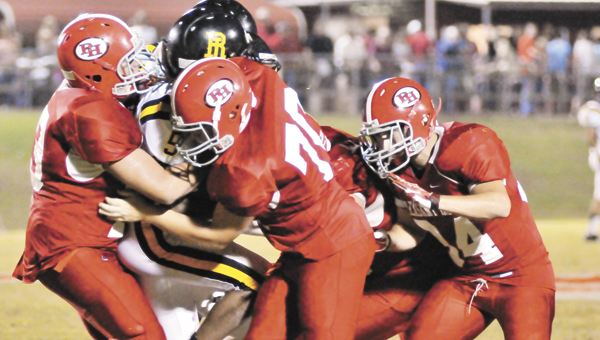 Pleasant Home went ahead early and held on late in a penalty-ridden game to beat Red Level 16-12 on Friday night at Eagles Field.

PHS started out the game hot on the offensive side of the ball and matched a good defensive effort. RLS couldn’t get anything going on the field as penalties dictated the Tigers’ game plan.

The Eagles’ defense was so good in the first half that they held the Tigers to only 53 yards. For the game, PHS only allowed 122 Red Level yards.

“Defensively, I felt our kids played a really good game,” PHS head football coach Cody McCain said. “We challenged them last week (after a 40-0 loss to Cottonwood) after a game where we really didn’t tackle well.”

Pleasant Home freshman quarterback Garrett Barton, who was making his first start, racked up 131 yards in the air, completing 11-of-16 passes with a touchdown.

McCain said the game plan was to get Barton in a rhythm early.’

“He just made the reads early in the game,” the coach said.

Red Level got on board with 4:16 to go in the opening quarter after PHS took its 16-0 lead on a long run from quarterback Wesley Holley.

A bright spot for the Tigers came in their defensive secondary.

Playing about 15-20 yards back from the line of scrimmage, the Tigers were able to break up a few passes from Barton, who ended up throwing two interceptions in the almost three-hour game.

Barton’s first interception came in the second quarter at about the 7:57 mark when Mark Adams made a good read on the play.

With under a minute to go in the first half, Barton threw the ball to an open Carl Whitehurst, but the ball tipped off his fingers and landed in the hands of Red Level’s Tray Atkins, who then scooted it from about 35 yards for a pick six with 42.4 seconds left.

What made things difficult for Pleasant Home (1-1, 1-0 in Class 1A, Region 2) last night was its lack of control on the line of scrimmage, especially on offense, McCain said.

“Offensively, it just all started up front,” he said. “Red Level was beating us up front all night. Our kids are not used to seeing that.

“It hurt us because we were getting in second or third and long situations,” he said. “At the same time, you’re trying to protect a freshman quarterback. After the first couple of drives, we weren’t able to get in any rhythm whatsoever. We weren’t able to get a good push up front.”

The Eagles scored on their first drive of the night when Whitehurst rushed in the end zone from 15 yards out with 8:10 left in the first quarter. Reid Adams, who had 63 yards on 18 carries, punched in the 2-point conversion for an 8-0 lead.

Having a good round of protection on the next offensive series, Barton was able to find Troy Fantroy for a 45-yard TD pass that put the Eagles ahead 16-0 after Adams’ second 2-point conversion attempt.

RLS answered quickly when Holley went around the left end for 48 yards and pay dirt to cut the lead to 16-6.

Both teams exchanged the ball 10 times in the second half. There were two turnovers.

After a slurry of penalties on the drive, RLS threw a desperation pass at its 44, to which Jon Cole Chesser made the interception to ice the game.

Austin Harrington led the Eagles with 75 yards on 12 carries. Whitehurst had 55 yards on eight carries.

Pleasant Home travels to Kinston, while Red Level is at McKenzie next week.