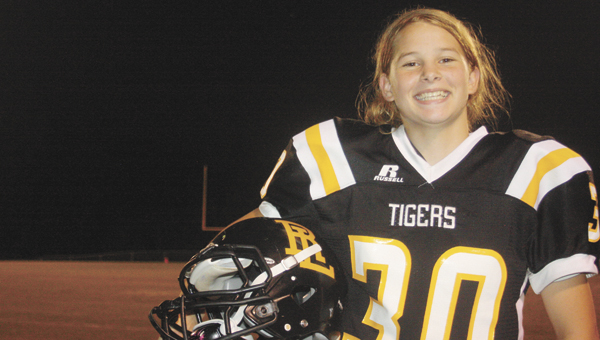 Madason Dunsford has a smile that can light up a room.

But when it comes to playing football, the Red Level eighth grader is all business.

for the past three years, Dunsford has played peewee football in Red Level. Last night, the 13 year old got her first dose of playing the sport she loves on the Tigers’ junior varsity squad. RLS played McKenzie.

Sitting without a care in the world and wearing her game-day jersey, Dunsford’s voice rose an octave when she talked about football.

“I really don’t know why I’m playing it,” she said. “I really started playing three years ago. It just seemed fun going out there and hitting people because you’re not allowed to hit in school, you know?”

A recent blog article on Yahoo! told of a Texas seventh grader and her parents who were in a fight with her school to let her play on the football team. The school wouldn’t allow Hailey Fuentes to play. Like Fuentes, Dunsford played in the peewee league.

According to the article, Fuentes is still in a battle with the school system’s board of education.

Dunsford said she was in luck that RLS allowed her to play football.

“It’s pretty fun playing at Red Level,” she said. “I think if I had moved to another school, then I wouldn’t be able to play.”

When asked what made her decide to play football, she said it looked like fun.

“I asked my dad (Eric) if I could play because it seemed pretty fun,” Dunsford said. “He looked at me and said, ‘Madason, you don’t need to play football. You might get smashed out there.’

Dunsford plays at wide receiver and cornerback for the Tigers’ JV team, and she couldn’t wait to get on the gridiron last night.

Dunsford said she might be able to play next year if she proves her dad wrong again, and a longtime goal is to play on the varsity squad.

“Dad said this is probably my last year playing because I’m a girl, but I really want to play next year on varsity because I think I can hit pretty good,” she said. “Or, that’s what most people tell me.”

In this day and age, role models are hard to come by at times.

Dunsford said she likes to encourage girls who want to play football to do so.

If they don’t want to play football, Dunsford tells them “just do what they love in life.”

When she’s not playing football, Dunsford plays basketball and softball for RLS.

She is also the daughter of April Dunsford of Florida.

Red Level’s going to face one of the, if not, most athletic and fast football teams in McKenzie on Friday... read more