He plays with no fear 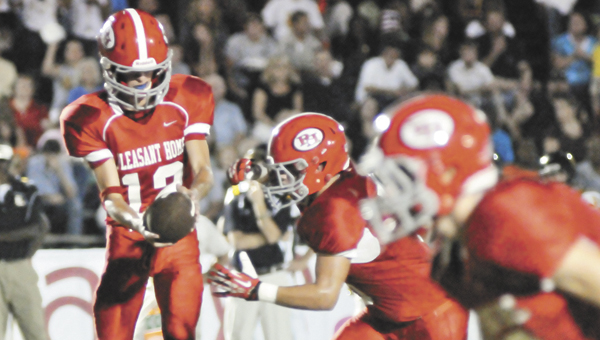 Garrett Barton had a lot on his mind last Thursday night.

For about three hours, the Pleasant Home freshman quarterback stared at the ceiling and thought about one thing — starting for the Eagles the next night against Red Level.

Barton went 12-of-18 for 131 yards and a touchdown in his first start to help lead PHS to a 16-12 victory over the Tigers. His performance earned him The Star-News’ Player of the Week honors.

Barton, who started at safety in Pleasant Home’s 40-0 loss to Cottonwood in week one, also threw two interceptions, one of which was a pick-six.

In those two throws, the freshman said it was hard to place the ball in the right spot.

“In those two long passes, I did see them break away and I had a pretty decent throw,” he said. “I think for the two interceptions, we had a little bit of room — it was hard to put them in there.”

Barton’s one touchdown pass came with 5:10 left in the first quarter, when he connected with receiver Troy Fantroy.

On the scoring throw, Barton said Fantroy had to make an adjustment to get to the 45-yard pass.

“(Fantroy) had to stop under that one,” he said.

Barton said it was pretty awesome to start at QB for the Eagles last week.

“It was pretty great,” he said. “The first start on offense was pretty fun. I’m not going to lie, I did stay up for about three hours the night before just looking at the ceiling nervous.”

How Barton got to running the Eagles’ offense was through another starter’s injury. Jon Cole Chesser suffered an injury during the Cottonwood loss, but did come back to make plays during last week’s win on both sides of the ball.

Barton said his first snap was a little nerve racking.

“But once I stepped on the field, I knew that I had to do my job and quit being so nervous,” he said. “It was one of those things where it was like here we are, and I was going to have to make the play.”

That sort of mentality has helped propel him as both a football and baseball player, PHS head football coach Cody McCain said. McCain was the Eagles’ baseball coach last season. Barton played at second base.

“Garrett’s a good player,” McCain said. “He’s a little seasoned, and wise beyond his years. When I was a baseball coach, I started him as a second baseman. He’s always been one of those kids who stands out. He doesn’t have a lot of fear.”

Barton said he learned how to overcome fear from his father, Robbie.

“My dad taught me to be humble about where I play, and knowing that everything happens for a reason,” the freshman said. “We’re all going to have to make a play every once in a while. I guess it was just my time.”

Barton will more than likely start, along side Chesser, this week as the Eagles travel to Kinston for their second region game of the season.

Barton is also the son of Mindy Barton of the Carolina Community.

Honorable mentions: Chesser and Carl Whitehurst; Straughn’s Devin Scott, who scored two of the Tigers’ three touchdowns in their 21-8 victory over W.S. Neal; and Andalusia’s Michael McCalman, who had 165 yards on 10 carries and a touchdown in the Bulldogs’ 47-14 win over Monroe County.

Eagles got their hands full