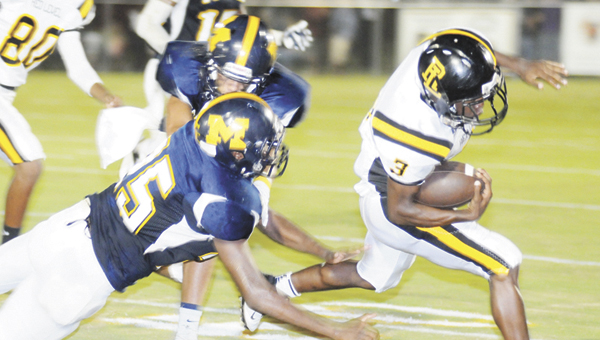 The McKenzie Tigers proved Friday night that they were cut from a different cloth as they trounced Red Level in a 47-0 shutout at home.

For McKenzie head coach Josh McLendon, the name of the game was starting fast and finishing fast, and it was a goal that McKenzie achieved emphatically.

Wide receiver Nico Peterson got the ball rolling by taking a handoff across the length of the field to the weak side of the play where, after a stiff arm and several blocks downfield, he would punch it in for a 42-yard touchdown run.

Running back Anthony Grace would follow up barely four minutes later by storming 60 yards downfield behind a sea of McKenzie jerseys to give the Tigers an early 13-0 lead with four minutes remaining in the first quarter.

But the quickest score of all would came at the end of the first, in which a blistering McKenzie hurry-up offense left Red Level on their heels and down 19-0 in a drive that took less than a minute off the clock.

“We caught them a few times when they were dragging, and anytime we see a team dragging a little bit we’re going to try to push the tempo a little bit to take advantage of that,” McLendon said. “And we were able to do that a couple of times tonight.”

A 33-0 lead going at the half allowed for many of the McKenzie starters to rest up in the second half, but the upbeat tempo remained constant as ninth-grade running back Chris Shufford tacked on six with a 34-yard run late in the fourth quarter to perhaps the loudest cheers of the night.

But the decision to play second stringers wasn’t just a common courtesy, but also because the extra help will be needed with next week’s tough opponent, Geneva County.

Kinston outscored Pleasant Home 41-0 in the second half en route to a 41-12 region victory over the Eagles on... read more