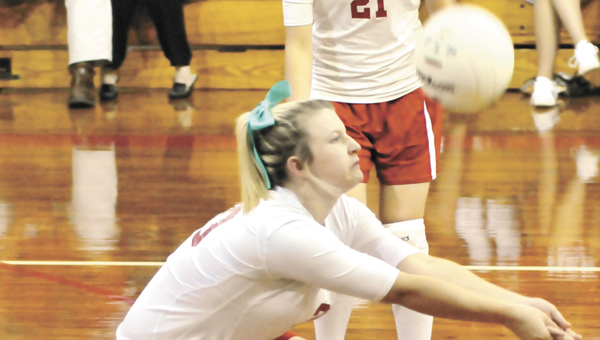 With this victory, PHS will host the Class 1A, Area 2 tournament, which will be held on Tues., Oct. 21.

Additionally, it automatically qualifies the Lady Eagles to play in the South Super Regional on Oct. 25 at Montgomery’s Cramton Bowl because they are in a three-team area. Pleasant Home awaits the winner of Florala-Kinston in the area tournament finals.

The winner and runner up of each area tournament advance to the super regional.

“We just got to get healthy,” Davis said. “It was good to see these younger kids step up.”

“We saw them doing things we wanted them to do all season — passing and receiving,” she said. “We’ve still got to work on serves.”

The Lady Wildcats (3-12) kept it close the rest of the way, but couldn’t overcome the deficit.

PHS (17-6) took another big lead in the third set and cruised to the win.

In other volleyball action Thursday, Andalusia lost to Northview and Houston Academy in a tri-match.

Alexis Lawrence and Stephanie Watts had four kills each; Haley Harper had eight assists; Merikal McCaskill and Shebly Meeks had three blocks each to lead AHS in the loss to Northview.

In the loss to HA, Meeks had two blocks, Lawrence had three kills and Harper had three assists.

Straughn got swept by Providence Christian and Rehobeth 2-0 each.

All local teams will be back in action on Tuesday.

Playing to play at home