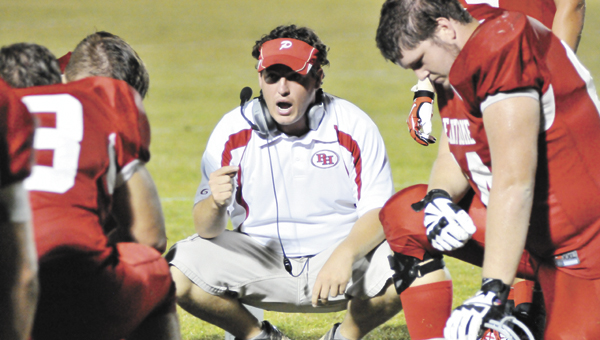 Pleasant Home defensive coordinator Lamar Gibson talks to his players during an injury timeout at a recent game. | File photo

Pleasant Home’s got a tough task this week on the road at third-ranked Brantley on Friday night.

The Eagles are coming off a 33-7 region loss to Geneva County. The Bulldogs beat McKenzie 35-16 in a key region contest.

So far this season, PHS has won one game — against winless Red Level in week two. Brantley is 6-1 overall, and 5-0 in Class 1A, Region 2.

BHS is one of three teams in Pleasant Home’s region that is similar in talent and skill, Eagles head football coach Cody McCain said.

“They’d be Brantley, Geneva County and McKenzie this year,” McCain said. “Brantley’s beaten both of those teams, but those were pretty close games.”

When asked if the Bulldogs can be beat, McCain said it isn’t “impossible.”

“I think we’ve competed very well in the past couple weeks,” he said. “I know we’ve come up short on the scoreboard.

“I think we’ve competed and I think it’d take a perfect game from us, and maybe for them to make a few mistakes here or there. I wouldn’t say that it’s impossible.”

Under new head football coach Ashley Kilcrease, the Bulldogs haven’t changed much, other than adding new formations to the offense, McCain said.

“For the most part, they run like previous Brantley teams,” he said. “They run the football very well. They do a great job on special teams. They return punts and kicks for touchdowns.”

With a game coming up like this against a powerhouse like Brantley, players could easily think that they’d have no chance for a win.

Fortunately for PHS, older players aren’t going to let up and have noticed a big improvement from the start of the season, McCain said.

“A lot those guys realize their time is winding on down,” he said. “I don’t think they’re going to take any game off. They realize that they only have a few games left. I think, from an effort stand point, I anticipate that our effort and eveything’s going to be really good.

“Our kids will continue to have a good attitude,” the coach said. “I told them the attitude and effort part are really the two main things that we’re looking for. In the execution, we just hope we can continue to improve.”

On Monday, McCain said the coaches broke down some statistics and what stood out was the turnover ratio.

PHS center Peyton Peacock injured his hand at practice last week, played in the game against Geneva County and will continue to be in action Friday night, where kick off is at 7.