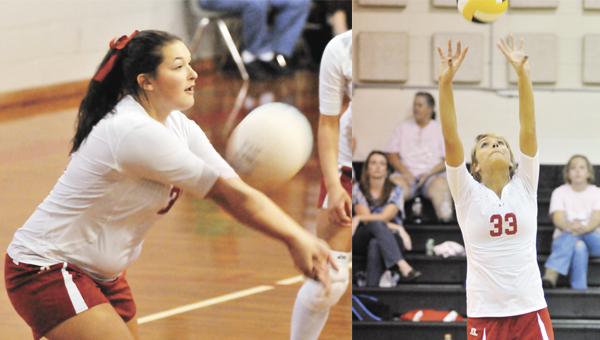 Whether it’s moving up to play on varsity or moving to the back row on the court, Pleasant Home seniors Ashley Williamson and Brianna Dozier took their new challenges and ran with them.

The seniors, who are a pair of six on the team, have been hard at work this season, helping lead the Lady Eagles to a 17-6 record. PHS ends its regular season tonight in a home match against Straughn, and will host the Class 1A, Area 2 tournament next Tuesday.

Williamson has been playing volleyball since her eighth grade year, and while on the junior varsity squad, was soon put in the setter’s position last year when Caitlin Jernigan got hurt. She has played the position since.

Dozier, who also has been playing volleyball since middle school, got put in the back row earlier this season when teammate and fellow senior Krissie Herman suffered a severe concussion.

Williamson said her development as a player has blossomed since her junior year.

Williamson said it was nerve-wracking because playing on the varsity level is different than on the junior varsity team.

“It was like playing with babies, and then I had to step up to varsity,” she said. “Now, I was playing with the big girls.”

Moving to the back row for Dozier was a huge step.

“I had to start taking care of the ball and chase it around a lot,” Dozier said. “There’s a lot of running.”

Williamson and Dozier’s jobs are different during matches.

Williamson stays more in the front-to-middle area near the net and makes passes for the front or side hitters to hit. Dozier’s job is to receive the serve and get it to the setter to set up the pass.

A hard part of playing in the back row is waiting on the serve, Dozier said.

It wasn’t until the second game after Herman got hurt that Dozier said she made an adjustment to receive the ball better.

Both said advancing to the varsity team was big to them because it meant that they’d be playing on a more “aggressive” team.

The Lady Eagles, along with their six seniors, will have to be aggressive as they play host to their area tournament with opponents and rivals, Kinston and Florala.

Williamson said the team will use its home court as an advantage because the area tournament has usually been held at KHS.

“I think it will be different at our place because they’re not used to,” she said. “We’re more used to it than they are. I just like winning against (KHS). I feel like that this is my house.”

With their win over the Lady Wildcats last week, not only did the Lady Eagles earn a berth to host the area tournament, but also got a ticket to play in the south super regional next week in Montgomery. The winner and runner up from each area tournament advance.

At the super regional, the team is going to have to step it up a lot and cover the court well, not to mention playing with good attitudes, Williamson said.

During their senior night, PHS volleyball coach Jerry Davis sat down with the seniors and gave them a goal of winning just one more match to break the school’s record of 17 wins. PHS can do so if it beats Straughn tonight.

More importantly though, both said they want to make it to the state tournament and to make it there, the team will have to play like it did in an earlier win over Kinston.

“If we play like we did against Kinston the second game we won — the very last time — if we play like that, then we’ll be able to make it,” Williamson said.