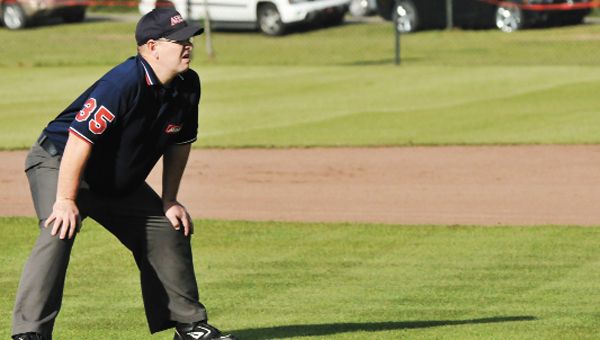 In the top of the seventh inning during a Straughn-Opp baseball game, umpire Ken Helms injured his lower right leg turning awkwardly to try and make an out call at second base.
Helms made the call, fell to the ground and regained his composure.

Still hobbling from the injury, Helms called the rest of the game.

Two nights previously, Helms had a long game as he called a doubleheader at Pleasant Home by himself, and later on, he posted on his Facebook account about how thrilling it was to call the games by himself.

For the next few weeks, he’ll be taking some time off to recover from another injury he sustained Thursday night.

Despite the recent medical problems on the field, Helms said it is the love of the game, his dedication and being able to watch boys come up through the years that keeps him donning an umpire’s uniform to this day.

The Opp native first got into calling games by seeing an advertisement in the newspaper.

When Helms started, D.J. McClain and Tony Holmes were two men who helped him a lot.

“So, then I told my wife (Wanda) that I’m going to start calling baseball,” he said.

Judging by the inflections in his voice, Helms seems to really enjoy being an umpire.

“I enjoy the game of baseball,” he said. “I’ve always loved baseball. I enjoy officiating for the fact that you get to see some really good baseball players come up (through the years). I’ve been blessed to have seen kids who went on to play college ball and kids who started in the little league. It’s fun to see how far they’ve come.”

Helms umpires both high school and recreational league games during the long spring and summer seasons.

In total, Helms said he officiates in between 70-80 games per year.

During any umpire’s stretch of experience, there’s bound to be a game where it made his or her skin crawl from nervousness.

One such game for Helms came during the Class 5A state semifinals when St. Paul’s played Charles Henderson in Troy.

In the baseball postseason, teams play the best of three series. Both teams split the first day, and Helms was set to call the game behind the plate, which is different than calling in the field.

“St. Paul’s had (former Alabama quarterback) AJ McCarron and Drew Miller, along with Destin Hood, who played for the Nationals,” Helms said. “I was nervous. Mike, Jed and I don’t have to talk anymore, but we all were nervous.

“It ended up being a blow-out game, but from the first inning my mouth was so dry,” he said. “I had a really good game according to them.”

Helms said the game had the largest crowd he’d ever seen at a high school game.

It can also get loud during a regular-season contest.

Helms said those who decide to become umpires need to have a “tough” skin.

“If you don’t like getting hollered at, it’s the wrong business for you,” he said.

It seems, for Helms, to be the right business.