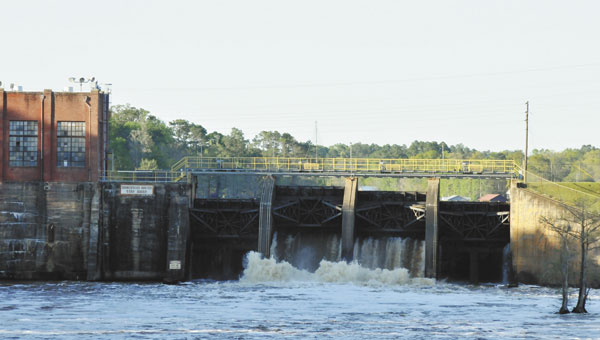 PowerSouth Energy Cooperative on Wednesday initiated its high water notification action plan as the tailwater below Point A dam exceeded 25 feet, but the National Weather Service is not predicting river flooding in the local area.

As of 6:30 a.m. Wednesday, the tailwater reading at Gantt was 6.92 feet, and the tailwater reading at Point A was 27.5 feet. Tailwater flow is the hourly average of the river flow just downstream of the hydro plants, measured in cubic feet per second. PowerSouth had 10 feet of gate open at the Gantt Hydro plant, and 32 feet of gate open at the Point A Hydro at that time.

The National Weather Service’s spring flood outlook map shows a number of locations in South Alabama near flood stage, but no flooding is expected in the Covington County area.

In Elba, the Pea River, which flooded twice in the 1990s, is expected to crest six feet below flood stage.

“Residents around the lakes are reminded that lake elevations are always subject to change, depending on conditions,” Ingram said. “We urge residents and property owners to stay abreast of the weather situation and take necessary safety precautions. Low-lying areas should be avoided. Also avoid downed power lines and contact your local electric provider in the event of a power outage.”

PowerSouth controls the operation of the dams at Gantt and Point A lakes on the Conecuh River near Gantt, which are subject to government-mandated water levels.