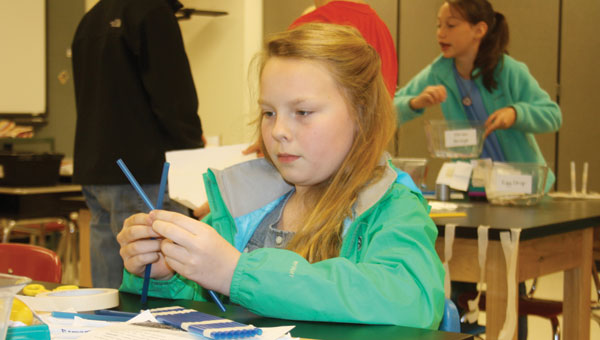 Students in the talented and gifted (TAG) program at Andalusia Elementary School are putting some of nature’s most basic principles to some very cool tests.

Barbara Peek, AHS TAG sponsor and science teacher, said the idea of a “Physics Day” was something she had kicked around as a possible learning exercise for her kids, but added it became a reality with a little encouragement from another teacher.

“I asked Brad Garner if his physics students at Andalusia High School would want to come and help with designs and that sort of thing, and he said they would love to,” Peek said.

With that hurdle cleared, Peek said she set out to create five unique challenges for her students, all of them hinging on the kids’ understanding of basic principles such as Isaac Newton’s laws of motion.

“TAG is for students in third through fifth grades,” she said. “But we decided to do this with the fifth graders, because they have a little better understanding of these concepts.”

And using that understanding, Peek said the kids are challenged to design and construct several physics-based devices, including: a catapult designed to launch a piece of aluminum foil that will be tested for distance and accuracy; a device that will protect a raw egg dropped from a predetermined height; a device to protect an egg from cracking after it is rolled down a ramp and into a wall; a “Life Saver Car,” also designed to protect an egg from cracking during a collision; and a straw bridge capable of supporting a 500-gram mass.

Peek said each project comes with a small allotment of materials the children must use in order to construct the specific device, including drinking straws, rubber bands, masking tape and paper.

Peek said the students will unveil and test their designs during “Physics Day” on Mon., April 21.

Peek said a special thanks is due for McDonalds, Zaxby’s, 2 Guys Pies and Brooks Hardware for donating materials used to build the devices.