CRUISIN’ AT THE BEACH 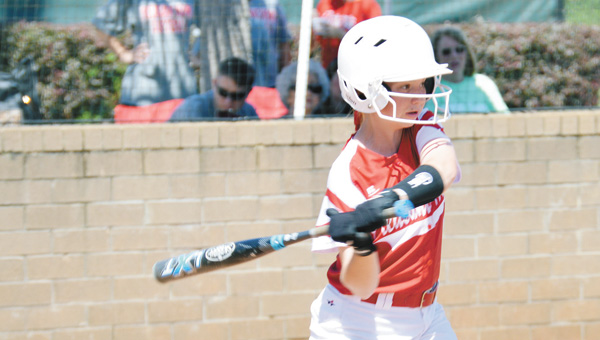 GULF SHORES — Pleasant Home advances to the AHSAA 1A South Regional championship game against No. 1 ranked Brantley with a 16-1 win against Fruitdale and 7-5 win over Kinston on Thursday in Gulf Shores.

The Lady Eagles took an early lead in the top of the second inning after a bases loaded walk to Hilson plated Bella Worley from third.

In the top of the third inning, the Lady Eagles went up 2-0 when Walker hit a sacrifice fly to right field that allowed Bulger to score.

The Lady Eagles addded to their lead in the top of the fourth when Bulger hammered a two-out double over the head of the Lady Bulldogs’ sprinting left fielder that drove in Self, who scored from first.

In the bottom of the fifth, the Lady Bulldogs surged out front of the Eagles with just two innings left.

Tori Cleghorn hit a hard ground ball that nearly hit the runner leaving second, but the distraction from the runner caused an error that sent the ball into the gap in left center allowing two runs to come across.

Cleghorn scored one play later, when Breanna Biddle reached on a RBI triple that tied the game at 3-3.

Biddle then scored on a sacrifice fly from Baylee Holley to give the Lady Bulldogs a 4-3 advantage with five innings in the books.

In the top of the sixth, the Lady Eagles battled back and took a 7-4 lead into the home half of the sixth.

Self tied the game up with a single into short right field that scored Gunter from first. Bulger followed with a run-scoring double that gave the Lady Eagles a 5-4 lead.

Godwin drove in Self with a fielder’s choice, and Walker drove in Bulger with a single to give the Lady Eagles a 7-4 advantage.

Tammi Hilson led off the bottom of the first inning with a single in game one, followed by walks from Jade Self and Taylor McGhee.

After two straight outs, Camille Holley drove in two runs with a double over the head of the Lady Pirates’ left fielder. Hope Gunter followed with a run-scoring single, and two passed balls allowed the Lady Eagles to take a 8-0 lead in the bottom of the first.

The Lady Pirates got a run back in the top of the second off errors, but it was all Lady Eagles’ starting pitcher Abby Walker would allow.

In the bottom of the second, Gunter drove in two runs with a single. Hilson, Self and Anna Bulger each drove in a run to put the Lady Eagles up 15-1 after two innings of play.

The Lady Eagles led off the top of third with two singles and a walk, when Holley was hit by a pitch to drive in the winning run.

Gunter led the Lady Eagles at the plate, going 2-for-2 with three RBIs.

“I felt like we played well all around,” Lady Eagles head coach Jessica Gibson said. “I was very proud of the effort and the mentality that we played with. Let’s hope it carries over to the rest of the tournament.”

For complete tournament action, visit our website at www.andalusiastarnews.com.

GULF SHORES — Opp jumped out front early in game one against Pike County, and held on to knock off... read more