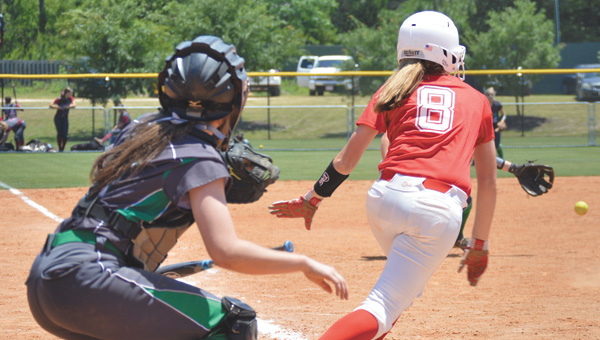 Pleasant Home’s Jade Self singles up the middle. | Josh Dutton/Star-News

GULF SHORES — After falling to Brantley, the Pleasant Home Lady Eagles took care of business against J.U. Blacksher with a 5-3 win in the loser’s bracket elimination game as they earned a trip to the state playoffs in Montgomery.

Blacksher jumped on the scoreboard first in the top of the first off a throwing error by the Lady Eagles.

The Lady Eagles responded with two quick scores of their own in the bottom of the first.

Tammi Hilson scored the first run for the Lady Eagles, when she scored on a ball put in play by Anna Bulger.

In to of the third, the Lady Eagles’ lead grew, when Cassidy Godwin drove in Bulger with a single.

Errors in the top half of the fourth allowed Blacksher to tie the contest up.

Camille Holley increased the lead in the fourth, with a two-run single.

The Lady Eagles added one more run when Taylor Mcghee drove in Hilson in the bottom of the sixth.

“It wasn’t our best effort,” Lady Eagles’ head coach Jessica Gibson said. “But we will never complain about a win.”

On what helped the Lady Eagles pull out the victory, Gibson said it was the girls’ faith in God.

“Without him, we are nothing,” she said. “We want to use our talents to the best of our ability, and glorify him.”