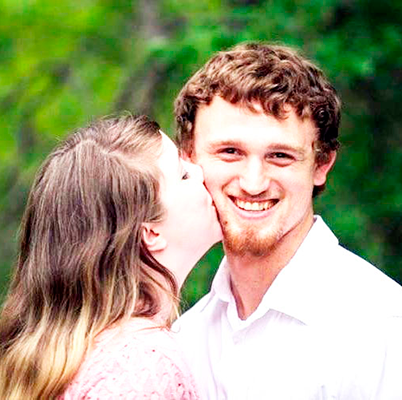 On the day he died at the hands of an impaired driver, wife begged husband to take day off

For most people, the holidays bring joy and happiness but for Andalusia’s Betsy Smith, everything changed this year.

Betsy’s husband, Trevor Scott Smith, died Dec. 17 after his vehicle was struck head on by a driver moving southbound in the northbound lane on the Opp Bypass near Hwy. 52. Trevor was 27.

Smith, originally from California and Colorado, moved to Alabama with his wife of three years, Betsy.

The two met in Colorado Springs in 2012 and hit it off right away.

“I remember meeting him and knowing he was mine,” Betsy said.

In May 2014, the couple married and moved to Alabama to be closer to Betsy’s grandfather. In Andalusia, Betsy is the assistant manager at Sherwin Williams.

“December 17, Trevor woke up early to go to work. He wasn’t even supposed to work that day,” Betsy said.

“It was his day off and I asked him not to go.”

Trevor worked as a manager Office Depot in Enterprise, and had been asked to work on a scheduled day off.

What seemed like a normal day took a turn for the worst.

“He never could wake up early, but he managed to that day. He even told me he would be home before I even woke up,” Betsy said.

“Instead I was woken up by a pounding on my door, a cop was standing there. He asked me if this was the home of Trevor Smith and I said, ‘Yes, I am his wife.’ He said the words I’ll never forget: ‘Your husband has been killed in an automobile accident.’ ”

The driver who hit Smith’s vehicle at 5:58 that Sunday morning has been charged manslaughter after law enforcement officials determined he was driving under the influence of alcohol. Trevor was pronounced dead on arrival, while the driver was life-lighted to a nearby hospital.

Betsy said at first she asked the officer if it was some kind of joke.

“He said they didn’t joke about this kind of thing,” she said.

Betsy remembers crying on her bed and screaming until her lungs hurt, and curling up in her husband’s favorite chair in the living room.

“It was the worst day of my entire life. I still expect him to come waltzing through the front door and calling me an idiot for believing this elaborate prank,” Betsy said.

For Betsy, focusing on the love the two shared helps her through her hard times.

“I remember meeting him and knowing he was mine. We started meeting every night at Denny’s after work, any excuse to meet up,” Betsy said.

Betsy said the couple was dreaming of buying a home.

“ Trevor and I would go on home tours and open houses for date night sometimes,” she wrote in her blog. “We loved walking through the homes and dreaming of what our lives would be like. We wanted to have babies and grow old together.”

Coping is difficult, she said.

“I don’t know how to live this life without him, but I know he would want me to be happy. I love him so much I can’t breathe sometimes. I know there are hard days ahead and harder nights. I’ll learn to live again and maybe the days won’t be quite so hard.”

To learn more about the love Betsy and Trevor shared, go to: https://happilyeverafteretc.com/our-love-story-trevor-and-betsy/.