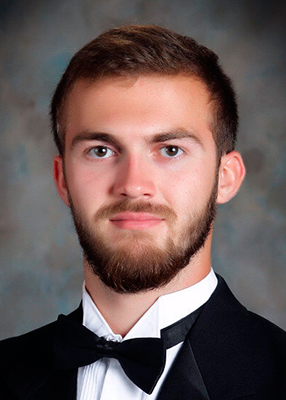 Pleasant Home Valedictorian Conner Sowards is headed to Troy University, but he has his eyes set on Nashville, A.K.A. Music City.

“I want to study music industry,” Sowards said. “But hopefully one day I plan to move to Nashville to be closer to opportunities.”

Sowards plays guitar and sings and is currently preparing a band for Andalusia’s July Jamz this summer.

Most of Sowards’ motivation for becoming valedictorian comes from his parents.

“Most of it came from my parents, but there was always a bit of competition with my classmates,” Sowards said. “That made me go the extra mile on schoolwork.”

Sowards said that he thought differently about competing with salutatorian Kenzie Watson.

“I never thought of it as competing with her,” Sowards said. “It was more about pushing myself to be the best I could as opposed to beating someone else.”

Sowards was involved with the drama club and has done a lot of work with student council.

Sowards father is his biggest role model as well as Dustin Kensrue of the band Thrice.

“I look up to my dad and go to him for everything,” Sowards said. “But as a musician, I consider Dustin Kensrue to be a major influence in the way I try to live.”

Outside of school, Sowards plays guitar whenever the opportunity presents itself, plays video games and watches movies regularly.

After graduation, Sowards plans to attend Troy University and pursue a degree in music industry.

He is the son of Hubble and Joy Sowards and his grandparents are Pete and Virginia Kelley and Jim and Sherry Garner.