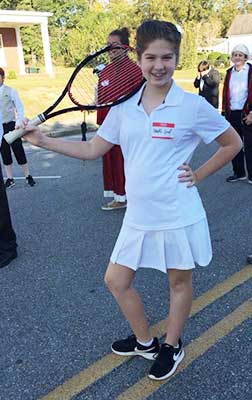 “This will be my first big tournament,” Castleberry said. “I usually play in the tournament at the Andalusia Summer Camp, but I have only been runner up for the past two years.”

Castleberry learned to play tennis at the Andalusia Tennis Summer Camp when she was six.

“I wanted to play tennis because I am really competitive,” Castleberry said. “I like that it is a one-on-one situation.”

She said that the summer camp was the only way in Andalusia to learn the game.

“This is really the only tennis thing in Andalusia,” Castleberry said. “So it really helped prepare me for everything I’m doing now, like playing in tournaments and trying to play on the high school team.”

In the past years, Andalusia High School has let middle school students play on the high school team, but a few years ago that changed. Castleberry is hoping that it will change again this year.

“I think this year it may change,” Castleberry said. “I think it would be something different for me, and I would love to play the sport all the time.”

She is hoping to win the tournament in Dothan so she can get her name out for college scholarships.

Castleberry looks up to her father and to professional tennis player Steffi Graf, whom she dressed as during Living History, a project that AJHS does to teach history.

“I look up to my dad because he always tells me when I’m wrong, it makes me learn a lot of things,” Castleberry said. “I look up to Steffi because she is such a legendary tennis player and she has won the Wimbledon four times.”

Castleberry will be participating in the Linda Stewart Memorial Dothan Open on June 22-24.

She is the daughter of Lynn and Jason Castleberry..