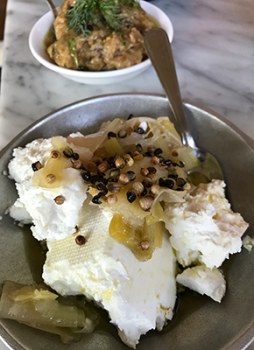 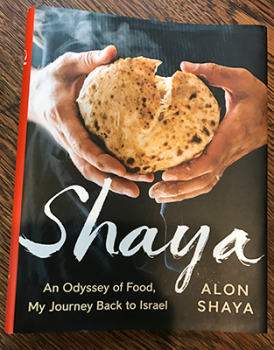 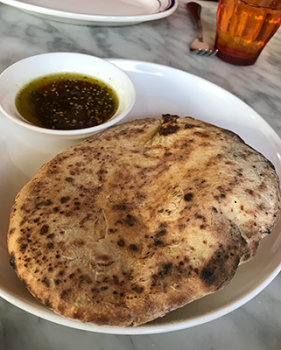 The bread is worth the trip, the author says.

We spent a wonderful four days in New Orleans at the New Orleans Collection Antiques Forum which we tend to do the first weekend in August every year. This year the subject was objects of utility. I have very little to say about all that—-I go for the food!!

We got to try Saba (means grandfather in Hebrew), the new restaurant of Alon Shaya. It is hard to get in but I made the reservation a month in advance. It was worth the wait. I have talked about Alon Shaya before when he opened his first Israeli restaurant, Shaya. He is a two-times James Beard award winning chef and his restaurants have been celebrated as the country’s most innovative and best by Bon Appétit, Food and Wine, Saveur, Eater, GQ and Esquire. He was the founder of Domenica, a regional Italian restaurant in the New Orleans historic Roosevelt Hotel in 2009. Five years later he opened Pizza Domenica. After several visits to Israel, he was inspired to go back to his roots of cooking, and in 2015 opened Shaya in New Orleans. Saba opened earlier this year and is already a big hit.

I had ordered Alon Shaya’s new cookbook called, “Shaya, An Odyssey of Food, My Journey Back to Israel” before I left for New Orleans and upon my return it was here. Such a great cookbook. His journey with food began in Israel and winds its way from the U.S.A.(Philadelphia) to Italy (Parma and Bergamo), back to Israel (Tel Aviv), and that all comes together in the American South, in the heart of New Orleans. It is a book that tells how food saved the author’s life, and how through a circuitous path of cooking he embraced his cultural heritage and combined his genius as a student of Italian cooking to create a whole new Southern-Israeli-Italian cuisine.

Shaya’s story is of a lost teenager uprooted from Israel at a young age, living in tough circumstances, first in northeast Philadelphia and then in a Philadelphia suburb with his Bulgarian-Israeli mother and his Romanian-Israeli father struggling to find odd jobs, not speaking the language, with Alon caught between two cultures, bullied in school, and wanting to belong to his American present and renounce his Israeli past. Alon was very alone and then rebuilt his life through food and creating a cuisine that today is celebrated and acknowledged as perfection.

His cookbook is user friendly. He gives information at the beginning about his spices, oils and vinegars, what salt he uses, best cheese and butter, how to buy meal and fish, and techniques. He tells how to make the best biscuits. We all need to know this! Grate your cold butter and freeze it for 30 minutes before putting it in the flour. How to have flaky crusts? Add vodka with the water. I was told just recently by a friend to use wine and water for a flaky crust so I guess the alcohol helps make it flaky.

I think Shaya and Saba have the best pita bread I have ever eaten. They have the correct oven for cooking this bread to make it rise and blistered before bringing it hot to the table. The bread alone is worth the reservation. Also, the hummus is the best I have ever eaten. I have a short-cut recipe below from the cookbook. The toppings on the hummus can make it even more delicious. We had a blue crab hummus at Saba! YUM! But you can add roasted cauliflower, Brussel sprouts, lamb, or anything you wish.

This recipe is when you need to make hummus in a pinch. Making hummus with dried chickpeas is preferred but does take more time. This makes a lot of hummus but great for a party.

1 ½ quarts plus 6 tablespoons water, divided, plus more as needed

Drain the chickpeas, and rinse them well, gently, since they’re already soft; massage them in your hands to loosen the skins so that they slip off in cooking.

Add the chickpeas, skins and all to a pot with 1 ½ quarts water. Bring it to a boil over high heat, then reduce the heat to medium. With a slotted spoon or small sieve, periodically skim away any of the skins that have floated to the top over the course of 10 to 15 minutes. If you would like to track your progress, reserve the skins in a measuring cup, aiming to have about 3/4 cup of skins by the time your purée the beans. The more time you take here, the smoother the results will be.

Meanwhile, combine the lemon juice and garlic, and let them steep for at least 30 minutes. Fish out the garlic before proceeding.

Drain the chickpeas, and combine them in a food processor with the garlic-infused lemon juice, 6 tablespoons water, olive oil, canola oil, tahini, salt, and cumin. Process for at least 5 minutes, until the hummus is very smooth and light. If you find that it is still thick and grainy, add more water, 1 tablespoon at a time, with the processor running, until it smooths itself into the consistency of buttercream frosting.

Serve at room temperature, drizzled with more olive oil if you like.

New week: more recipes from this great cookbook. I have tried several that you need to try.