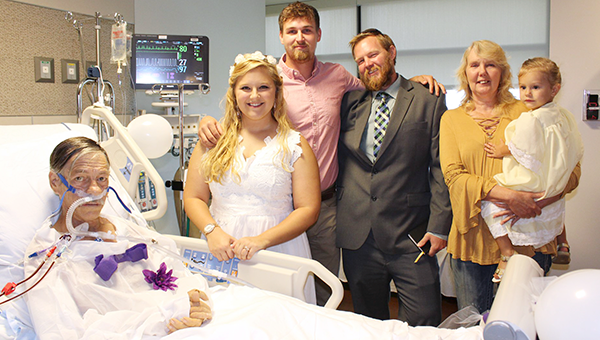 “The bride carried a bouquet of Sacred Heart-purple flowers bound together with white tulle. The chapel was a Surgical ICU room at Sacred Heart Pensacola. White hospital sheets adorned the walls dotted with white balloons blown up by RNs. Guests signed a registry book on a tray table outside the room.”

The bride puts it more succinctly.

“It was perfect,” she said.

The Howells planned to marry in November, and still plan to have a more formal ceremony then. But because the bride’s father, Walter Kuhn, was delaying risky surgery to make sure he walked his little girl down the aisle, they decided to help him stop using that excuse.

“In February, my father found out that he had kidney failure for the second time,” Howell said. “He started dialysis. But about a month ago, my mother and father went to Pensacola for a checkup. We found out my dad has two valves that will not close in his heart.

The surgery to correct the heart valve problem is more risky for him because of his kidney issues.

“They wanted him to go ahead and have open heart surgery,” Howell said. “But he said, ‘No, I’m walking my daughter down the aisle in November.’ He didn’t want to miss the chance, so he decided he would wait on the surgery.”

Tuesday, Kuhn passed out, and couldn’t breathe. Howell helped her mom, Jenny Kuhn, get him to the hospital, and he was later transferred to Sacred Heart in Pensacola.

“After we got my dad to Pensacola, my mom told me I needed to tell C.J., who works offshore, to come home,” Howell said. “At this point, it was looking just awful. My dad is very godly and has a strong, strong faith, but he was scared.

“I told C.J. my dad couldn’t put off the surgery any more. We needed to go ahead and get married so my father would have no more excuses. He agreed.”

They made the decision on Wednesday, and went and got licenses. Howell also told nurses in Sacred Heart’s surgical intensive care unit the plans, and they got busy, too.

Howell’s wedding dress had not yet been altered for the November ceremony. The couple’s rings weren’t ready. But that didn’t matter.

“We went across the street to the mall, and actually bought rings for the ceremony at Claire’s,” she said. “I bought a dress, but it was cut too low, so I was sewing it up on the way to the hospital.”

Her fiance’s step-mom made a dress for Howell’s 2-year-old daughter, Kailynn Annalise Compton.

And the nurses decorated, creating a bow tie for the father of the bride to wear on his hospital gown, and adding a cake and bouquet to the celebration. They even sprinkled flower petals in Kuhn’s room, where the ceremony was held.

“It was just our parents there with us,” Howell said. “It was beautiful. My father couldn’t have been happier. It was the best day we could have hoped for.”

If Thursday was perfect for the family’s patient, Thursday night was not.

“(Thursday night) he really had a rough time,” Howell said. “But they did the heart cath (Friday) and let him eat. He is much better.”

Howell said she and other members of the family agreed that the hospital could post their story on social media because they covet prayers for Kuhn’s recovery.

“We believe there is so much power in prayer,” Howell said. “We just wanted prayers.”

The surgeons hope that Kuhn, who is 63, can gain strength in the next week and have the heart surgery next week.

Howell said she’s watched her father overcome challenges before, dragging himself to work to feed his children.

“He is the reason I have an example of how to work and be a parent,” she said.

Kuhn gave the newlyweds five acres as a wedding gift, and the couple plans to build a home there and stay close to family.

Howell said as her brother ended the ceremony, and she and her husband shared a kiss, her 2-year-old did something spontaneous.

“She picked up the flower petals and threw them in the air,” she said. “We actually have a video of it. Her timing was perfect.”

C.J. Howell is the son of Charlie and Melody Howell and Sherry Howell and John Mitchell, all of whom also attended the wedding.