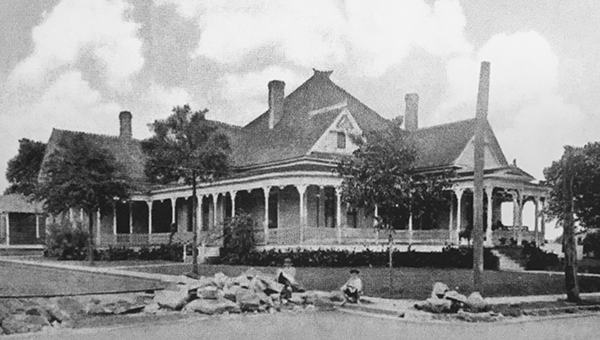 The old Covington County Hospital on South Three Notch Street, incorporated in 1918. Dr. Quincy Ray was the staff physician at the time.

Remember when: Influenza struck county in 1918

Many medical historians have called the influenza pandemic of 1918, 100 years ago, one of the deadliest natural disasters in human history. It is estimated that 500 million people worldwide devastated with the illness came down with the flu including people in the cold regions of the Arctic and in remote islands in the Pacific. Fifty to one hundred million deaths resulted in the outbreak of what was called the “Spanish flu” which infected young and old of both genders and of every race in every country.

The first recorded case of Spanish influenza came not in Spain as was originally reported in newspapers across the country but at Camp Funston military base in Kansas where American troops were training to join the Great War in Europe (World War I). In March 1918 a cook reported to the infirmary in the morning and by midday, more than one hundred men became ill. Camp doctors converted an airplane hangar into an infirmary to accommodate all the sick men. The flu was transmitted when infected people sneezed or coughed and expelled mucus into the air or onto another person. “The disease was spread fastest,” according to the James Baggett article in the recent American Heritage magazine, “in close quarters like military barracks, ships, train cars, theatres, stores, offices, and houses.”

By April 1918 the flu had spread to the American Midwest then traveled with the soldiers to port cities along the East coast onto ships carrying troops to Europe. The ships became floating infirmaries as they crossed the ocean and then when soldiers unloaded, the disease spread to foreign ports. In the filthy trenches on the battlefields, the flu spread quickly. By May the civilian populations of France, Spain, Italy, Great Britain, Germany, and Russia were infected with influenza.

By August the disease returned to America coming by ships to ports in Boston and New York. By September the flu had spread throughout the United States, Mexico, and South America. Flu cases were reported in Alabama in the spring and summer of 1918 but by December, the disease reached every county in Alabama including Covington.

Like any flu, the illness could start with a sore throat, fever, fatigue, body aches, and headache. Many died of pneumonia when the patient’s lungs were too congested to transfer oxygen to the blood. An entire face flushed red would turn blue. Then it turned black creeping into the victim’s extremities starting with the person’s fingernails, hands, and feet before turning their legs, arms, and body black. Death came by drowning as victims’ lungs filled with their own blood. Though not pleasant to read about or even think about, this was the progression.

Drug stores distributed free masks. Many people wrapped gauze around their mouths and noses when going out. At its mid-October peak in Alabama, the pandemic was sickening hundreds of people a day. Although public schools had mostly closed, colleges and universities remained open. At the University of Alabama, two fraternity houses were converted into infirmaries as one hundred cases were reported. The campus of Birmingham-Southern was quarantined as well as Huntingdon College known then as the Woman’s College of Alabama.

In October more than half the men working in Mobile’s shipyards were out sick. The Birmingham area coal mining camps were left with crews out for days at a time when coal was desperately needed for the war. Alabama’s economy was negatively impacted by the pandemic in addition to the significant amount of human misery caused by the flu. No one knows exactly how many people died of the disease although the Alabama State Board of Health reported 145,821 cases with 5,446 deaths from influenza and an additional 5,882 pneumonia deaths in 1918 (Source from Alabama Heritage magazine.).

It is still unclear exactly where it originated or when, but the disease killed more people than both world wars combined!

In October 1918 The Andalusia Star News reported, “Calls for volunteer physicians in Alabama to serve during the emergency were sent out Thursday to the state health department. Cooperating with the U.S. Health Service, the state department will have charge of the corps directing the physicians to places where Spanish influenza is serious. Physicians at Andalusia will make regular trips to Opp and Enterprise where the disease is fast spreading.”

The 31st Alabama “Dixie Division”was photographed in front of the East Three Notch School prior to World War I.

“The Andalusia chapter of the American Red Cross was asked to donate 450 handkerchiefs for the soldiers. Those good ladies in Red Level, River Falls, and Loango Auxiliaries always respond nobly to every demand for help. One parcel will be accepted by the War Department through the Red Cross for each soldier overseas. Keep this fact in mind when planning a Merry Christmas for the boys over there.”

A newspaper ad appeared in October 1918 – “DANGEROUS EFFECTS OF THE SPANISH INFLUENZE OR GRIPPE – How it can be avoided and treated – Simple rules to follow – No occasion to panic. In most cases, the attack is more sudden than that of the ordinary grippe which it resembles.”

It is certain that Mr. A. M. Riley, Druggist was quite busy to say the least. In some towns across America, the druggists who filled the prescriptions were either sick or died of the flu. Physicians were no exception.

November 1918 – “CIRCUIT COURT POSTPONED – Owing to the influenza epidemic (later referred to as a pandemic) in certain parts of Covington County, the attorneys and representative business men of Andalusia requested Judge A.B. Foster to convene circuit court here next Monday and the remaining term of the court until further notice is given.”

Another large notice was published in late November – “Doctors and specialists will be at the Dixie Hotel on December 6, 1918 (to see patients).”

The worldwide flu and its spread to Covington County resulted in Andalusia’s first hospital to open which was a converted Victorian house on the corner of South Three Notch and Watson Streets. Dr. T. Q. (Quincy) Ray was the chief of staff. He was the grandfather of Mrs. Sidney Waits, the former Polly Wilder.

On November 22, 1918, a newspaper headline read, “Influenza Situation – The Health Department reports as follows: The number of new cases is growing steadily smaller while more are being released than are placed in quarantine each day. No new cases have developed among the employees of the (Swift) packing plant.”

Obituaries appeared regularly in the local paper. “Mrs. Ira Rose died at her home on Opp Avenue Sunday of pneumonia following influenza. Mrs. Rose before her marriage a year ago was Miss Hattie Larkin of Loango and Red Level.”

The “angel of death” visited many households during that period. “John Carson McArtan, age 20, the eldest son of Mr. and Mrs. D. A. McArtan, died at the home of his parents (on Sixth Avenue) after an illness of just one week, influenza followed by pneumonia.” He was a college student visiting home for the Thanksgiving holidays. Lucy Doyle Brady is the niece of the young man she never knew. Lucy’s grandson Carson Brady is named for her late uncle. She still resides in the family home.

Young Mary Hill Randal, age 18, daughter of Mrs. Albert Lamar Rankin who resided on East Three Notch Street in the home known by locals as the Merrill-Scarborough house that was moved and restored by Charles and Jean Gantt, tragically died of the flu. I believe someone told me that Miss Rankin was a Freshman at the University of Alabama and engaged to Count Darling at the time of her death in 1918.

Not too long ago I saw a documentary on the History Channel about the Worldwide Influenza Pandemic of 1918. It is believed that everyone who didn’t get the flu was immune to it, and that is the only thing that brought the epidemic to a close!

“Gone but not forgotten” is the theme of today’s Remember When. Alabamians and Andalusians for the longest time remembered the ways that families and communities pulled together in 1918. I suggest that you walk through Magnolia Cemetery and other cemeteries in the county and view the headstones carved with the dates of the untimely deaths of 1918.

Heaven help us if we have to go through another pandemic similar to the one 100 years ago! Several strains of the flu are still around, but today in 2018 there are helpful medicines available along with flu shots and pneumonia shots which are preventative measures that we should all take note of.

By Loren Gary What Halloween costume do you think Secretary of State John Merrill chose for last night’s trick-or-treating? Had... read more