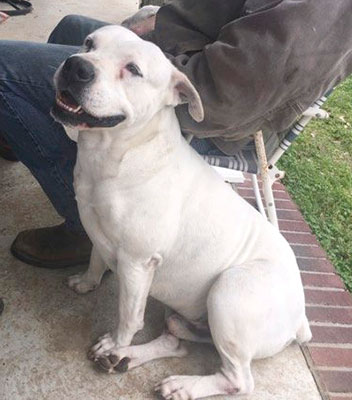 Duke is a bulldog mix awaiting a new home.

With springtime in the air, that means more dogs in the shelter, according to Kayla Cleland from the Andalusia Animal Shelter.

In a recent three-day period, the animal shelter received more than 12 dogs, but their adoption numbers are on the rise.

“When springtime comes around, there are going to be more drop offs,” Cleland said. “But, we have had a lot of adoptions in the past week as well. We had two today [Thursday,] three yesterday [Wednesday] and two on Monday. That is very substantial for us.”

Cleland said that a new fostering program has lowered the number of adopted animals that are returned.

“The problem used to be that people would come in and adopt and then bring the animal back when it didn’t work out,” Cleland said. “Now with the fostering program, they have either three or seven days where they can take an animal, introduce it into their home and see if it is a good fit. If you have another pet, you want to make sure that it gets along with them; if you have a child you want to see if they get along as well. With this option they can do that, and it has decreased our return rates.”

When dogs are adopted. another problem people have is spaying and neutering their new pet, but Cleland said that there are several options out there to help lower the costs.

“The Andalusia Humane Society provides vouchers for spaying and neutering and it cuts down the cost substantially,” Cleland said. “Dr. Jones also spays and neuters for only $50 and only $13 for the rabies shot, so that is already pretty cheap.”

The cost of keeping the shelter stocked is not cheap, so the animal shelter posted a Wish List on Facebook on Monday to try and receive donations.

“We do run on a lot of donations,” Cleland said. “I mean we are a municipality, but it really does get expensive. We posted a list of everything that we use and will hopefully get some donations. We also have an Amazon Wish List where people can order it straight from the Internet and it will be shipped directly to us.”

Cleland said that the wish list has items that people don’t think they need.

“The list has anything really,” Cleland said. “Blankets, towels, kiddie swimming pools because people don’t realize that we use those. Dogs will use the kiddie swimming pools to play in during the summer and we even use them when a dog is going into labor. We need kitty litter, dog food and pretty much anything that you can think of.”

As of Thursday afternoon, there was a total of 31 animals in the Andalusia Animal Shelter, 27 dogs and three cats.