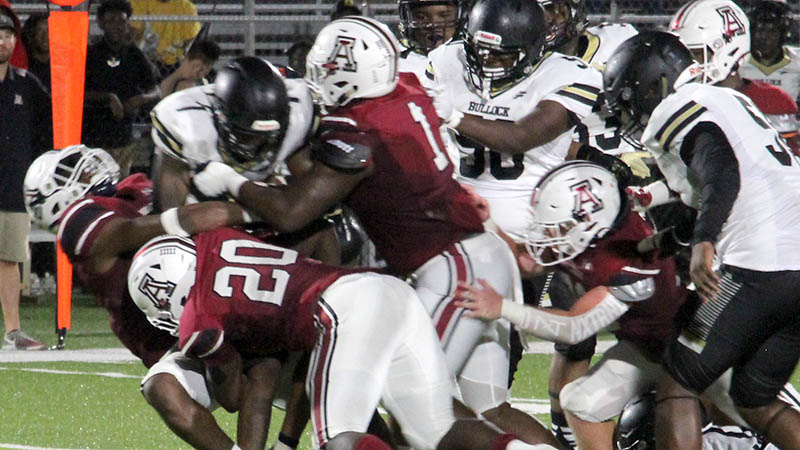 A group of Bulldog defenders take down a Bullock County ball carrier. The defense gave up only five rushing yards to the Hornets, holding them to 168 total yards.

The Andalusia Bulldogs took care of its homecoming business Friday, collecting a region win in the process, defeating Bullock County, 50-9.

The Bulldogs racked up 272 yards of total offense with senior Dorian Crittenden leading the way with 143 rushing yards and three touchdowns on the night.

Jack Lathrop continues to keep defenses honest providing a consistent passing game. Against Bullock County, he went 8-of-9 for 94 yards with a touchdown. Leading receivers were Tycamren Jackson with five catches for 38 yards and Connor Dalton who hauled in a 40-yard pass, setting up a short 1-yard touchdown run.

Defensively, the Bulldogs were a long field goal short of a shut-out, surrendering only 173 yards to the Hornets, only five of those yards came on the ground. Leading the defensive effort was Garrett Blackston and Cameron Johnson who each recorded 5.5 tackles. Johnson added 2.5 tackles for loss, including a sack. Xavier Marshall also recorded a sack in the game along with two TFLs.

Zerrick Jones, who finished the night with 38 rushing yards and two touchdowns, also returned a kickoff for a touchdown.

The Bulldog defensive effort led to the first score of the game. After holding the Hornets on a three-and-out on the first possession of the game, a bad snap on the punt led to a safety. 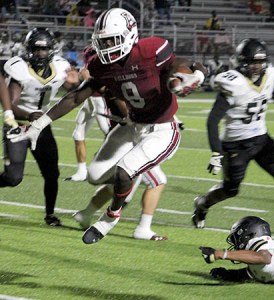 After the free kick, Andalusia leaned on Crittenden who received four consecutive handoffs, totaling 80 yards and capped with a 4-yard touchdown. Kolya Barton’s PAT made the score 9-0.

Andalusia increased its lead to 15-0 on a 1-yard run by Zerrick Jones in the final seconds of the first quarter.

Another three-and-out delivered by the defense led to a fake punt by Bullock, but that backfired, giving the Bulldogs the ball in great position at the BCHS 25-yard line. Quarterback Jack Lathrop made the Hornets pay quickly, hitting Tycamren Jackson crossing the field for the 25-yard touchdown pass. A 2-point conversion was good to bring the score to 23-0.

A fumble recovery by Kameron Weaver at the Hornet 33 set Andalusia up for the next score. The Bulldogs called on Crittenden again who ultimately scored on an 11-yard run. The point-after was no good as the score stood at 29-0.

Bullock County would get on the board at 2:20 remaining in the half when Hugo Garcia knocked home a 42-yard field goal, 29-3.

There was still enough time on the board for Andalusia. After a 28-yard kickoff return by Jones, the Bulldogs quickly made their way downfield when Lathrop hit Dylan Jackson for a 21-yard gain that was followed by a personal foul penalty. From there, Jones finished things off with a 7-yard touchdown run to make the halftime score, 36-3.

Andalusia increased its lead early in the third. Their next score was set up by a 40-yard pass from Lathrop to Connor Dalton all the way to the 1-yard line and Crittenden handled it from there, increasing the lead to 43-3.

Bullock County added a touchdown in the fourth on a big 80-yard pass.

But, Andalusia wasn’t done as Jones found running room and returned the following kickoff 77 yards to make the final 50-9.