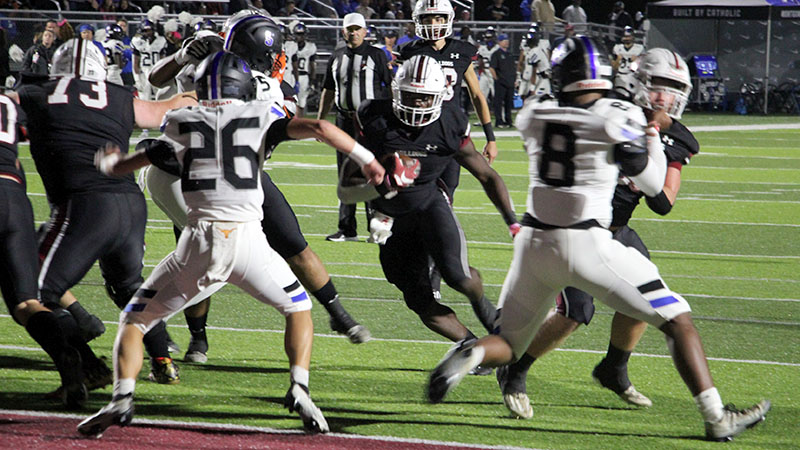 J’Marion Burnette finds a path to the endzone for Andalusia’s first score against Montgomery Catholic. Burnett finished the game with 248 yards and two touchdowns. (PHOTO BY ROBERT BLANKENSHIP)

After a tight first half against the number one team in the state, the third-ranked Andalusia Bulldogs failed to score in the second half, falling to Montgomery Catholic, 45-23.

Andalusia’s loss means they finish in second place in 4A’s Region 2 behind the Knights.

Early on, Montgomery Catholic had a hard time slowing down the Bulldog running attack, specifically J’Marion Burnette who ran for 248 yards on 31 attempts and scored two touchdowns.

The Knights amassed a total of 500 total yards in the game to Andalusia’s 397. Quarterback Caleb McCreary led the Knights, completing 17 of 27 passes for 377 yards and four touchdowns.

The Bulldogs held the lead on several occasions in the first half, including taking a 6-0 lead on a 24-yard run by Dorian Crittenden. The point-after was no good.

The Knights came right back to take a 7-0 lead on a 38-yard touchdown reception by Luke Harkless.

Midway through the first quarter the Bulldogs recovered a fumble and Burnette followed with a 58-yard run to the Knights’ 4-yard line. He would push it in for 1 yard out two plays later. Crittenden put the ball in for a 2-point conversion, lifting the Bulldogs to a 14-7 lead.

Montgomery Catholic cut the lead to four on a 44-yard field goal by Gabe Russo in the final seconds of the quarter.

Andalusia added to its lead on the following possession. Jack Lathrop connected with receiver Kaden Denson for a 41-yard gain all the way to the Knight’s 15-yard line. From there, it was all Burnette who ultimately put the ball in from the 1-yard line. Cobb Stewart’s PAT was good to make the score 21-10.

The Knights quickly got back on track with a 61-yard touchdown pass from McCreary to Jeremiah Cobb.

Later in the quarter, the Bulldogs were stopped and Dylan Jackson’s punt backed the Knights up to the 8-yard line. On the next play, Cameron Johnson and Riley Tucker applied pressure leading to an intentional grounding call in the endzone for a safety, lifting the Bulldogs edge to 23-17.

The Knights came right back scoring on their next possession with a 23-yard touchdown pass, providing them a 24-23 halftime lead.

Second half scoring was all Montgomery Catholic. They added one touchdown in the third quarter on a 2-yard run by McCreary with 4:44 in the quarter.

The loss drops Andalusia to 9-1 overall and 6-1 in the region. After next week’s bye, the Bulldogs will host Jackson (7-2) in the first round of the playoffs.