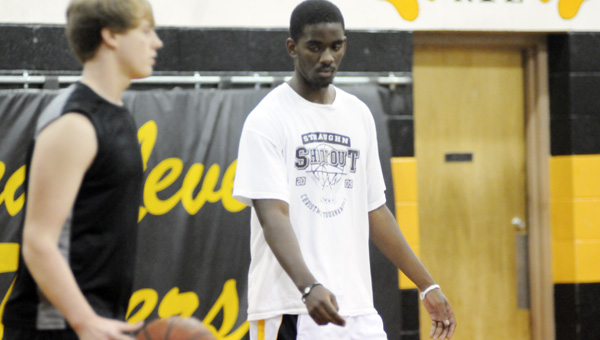 He only has to wait two more days before his team will travel to face Opp Friday night.

The Tigers are coming off of a 17-12 2009-2010 season, where Red Level finished at the Class 2A South Regional Tournament in Mobile.

Since the first day he was hired to replace former coach Fred Kelley, Catrett said his main goal for this team hasn’t changed.

“Our ultimate goal is to get to Birmingham (at the state finals),” Catrett said.

When asked if this was possible, Catrett said if the players execute the “small things” then it can happen.

“I think that’s going to be the key to success is doing the small things,” he said.

Red Level is comprised of four seniors and three juniors. As of right now, Catrett said they all are competing for starting positions.

“That’s how it’s going to be all season,” he said watching through his office window. “It’ll all come down to who comes in there, and does what they’re supposed to do and put forth the effort to produce.”

This season, the Tigers are in a five-team area in Class 2A, Area 2 with Elba, New Brockton, Samson and Zion Chapel.

Red Level will start its area play in January against Zion Chapel on the road.

Catrett said the team’s goal in regards to area play is a lofty one.

Catrett said practice has gone well thus far, and the first game this Friday night at Opp will be a contest where there will be “no excuses.”

“We’re going to try to improve every game — we’re playing and aiming for perfection every game,” he said. “That’s what we’re going in it for.

“The first game, there will be no excuses,” he said. “Of course, we’re going to try and get better during the season. Even though this makes the second week at practice, we worked during the summer, so they should know what we’re doing by now.”