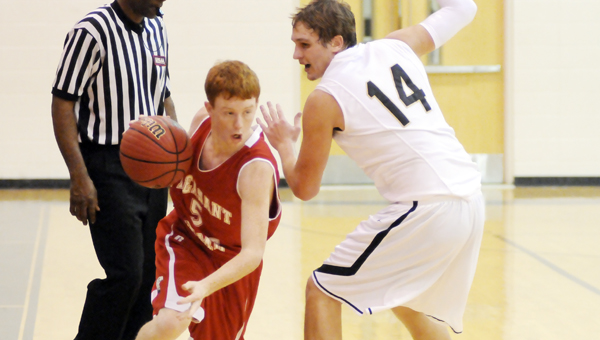 Pleasant Home utilized a solid inside game attack on Tuesday night, and came out with a 37-23 win over Straughn.

The Eagles improved to 4-1 for the season with the win over the Tigers, and will vie for another win tonight against Andalusia.

PHS coach Jerry Davis said overall his team played well, but execution was lacking in areas of the game.

“We didn’t pound it real well,” he said. “We shot ourselves in the foot, and they got after us.”

After trailing 17-9 at half time, Straughn stepped up its intensity and created turnovers in the low-scoring affair.

Pleasant Home held out, going on an early 4-0 run in the third quarter, and outscored Straughn 6-5.

“The first ball game is tough,” Davis said. “I don’t care who you are and if you have them all back or whatever. It’s tough. I thought his (SHS coach Rusty Andrews) kids played well, and played hard.”

But, the Eagles pulled away from the Tigers with the help of Cory Sims, who put up six of his 11 points in the fourth quarter.

Pleasant Home’s Colter Poole also had a good night with nine points, all scored in the first half. Lance Davis added eight points and Jeffrey Slaughter chipped in six for the Eagles.

Andrews said he liked the “effort” his team showed on Tuesday night.

“I had no problems with the effort,” Andrews said. “We just didn’t play real smart basketball, but it was our first game. We didn’t do the things we’ve got to do to be a better ball club.”

The crux for the Tigers in the contest was their inside game, where rebounds and put-backs didn’t come with the size they have in the middle.

“We’ve got to have play out of our big men,” Andrews said. “We just didn’t get the effort there. I was very proud of our effort. We didn’t give up, and we’re going to get better.”

Straughn will play host to Florala on Friday night.