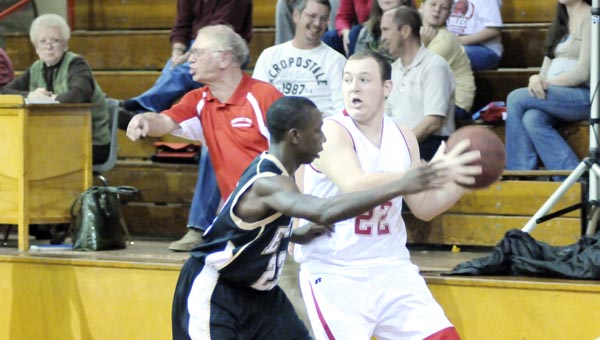 Pleasant Home mounted a strong defensive fourth period on Friday night, as the Eagles went on to beat Excel 44-35.

PHS coach Jerry Davis said the effort in the final period was “key” in the win.

“There weren’t any real adjustments for us,” Davis said about the period. “We just started doing things we were supposed to. We got a couple steals, and a couple buckets and tried to hang on (the lead) then.”

Leading into the final period of the close contest, the Eagles were trailing 29-26 late in the third period.

After setting up a three-point play, Pleasant Home’s Colter Poole drained a tres to tie the game up at 29-29.

From there, Pleasant Home (8-5) utilized its strong defense, and impressive inside play to bring out the win in the fourth period.

The Eagles took a 38-33 lead in the fourth on a break away steal by Cory Sims with four minutes remaining.

“Colter and Cory are two we depend on,” Davis said. “We kind of go as they go.”

On Thursday night, Pleasant Home lost a close road game to McKenzie 45-43 in overtime. McKenzie was the second Class 1A school the Eagles have played this season. Their first was against Georgiana in the Straughn Christmas Shoot Out.

The other teams Pleasant Home has played this season have been 2A, 3A and 4A schools. Excel is in Class 3A. The Eagles have played two to three different classifications each week.

“Forty-four points ain’t a whole lot, but that’s the way we’ve got to be,” Davis said about playing against Excel. “Sixes, sevens and eights add up. We are good defensively. We’re rebounding the ball real well, and we have played really good people.”

Pleasant Home will play host to the Alabama-Florida Boys and Girls Shoot Out from Dec. 30-Jan. 1.