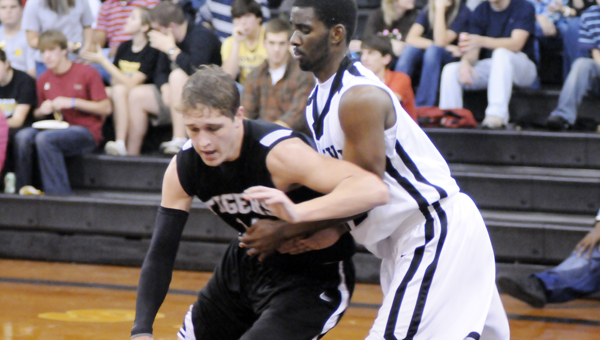 But as “ugly” as it may have been, RLS coach Allen Catrett said he’ll take it.

“I’m happy that we pulled out the win — we found out a way to win,” Catrett said.

One of the deciding factors that helped Red Level pull out the win was pressure on both sides of the ball.

Trailing 40-37, Straughn’s Avery Driver hit a three-pointer to send the game into overtime, but Red Level’s defensive play proved too much for Straughn.

RLS started out hot in the extra period on a drive to the basket from Troy Nolen, who made the lay up on a wrap around shot.

The game remained close throughout the overtime period, but Red Level (7-5) had the upper hand, blocking shots and forcing turnovers.

Straughn’s Avery Driver then hit a lay up driving to the basket to cut into Red Level’s lead at 46-44.

Red Level made it a two possession game on a lay up by Nolen, who led the Tigers with 16 points.

Nick Dorsey scored the last point for Red Level on the second of two free throws.

SHS coach Rusty Andrews said the loss was due to “inconsistency.”

“It’s the same thing,” Andrews said. “We play hard, but we’re just inconsistent down the stretch. We don’t make intelligent plays when we have to because we’re young. We don’t have the experience that we need, but over time, that’ll come.

“We’re always in every ball game,” he said. “We’ve got to keep plugging away, and then eventually we’ll get over that hump.”

Red Level found itself in foul trouble early with McGee, Raheem Bullock and Dorsey having two fouls each at the start of the game.

But, Red Level prevailed, never letting up on its pressure to outscore Straughn 8-6 in the first period.

Straughn (2-8) had the upper hand in the second period, taking advantage of Red Level’s foul trouble, forcing the home Tigers to rely on their bench play.

Nolen helped tie the game up 13-13 with one of his two three-pointers.

At the break, Red Level found itself trailing 20-19 because Straughn stepped up its inside game late in the second period.

The game remained tight in the third period, but Red Level had the upper hand by the end when McGee hits a jumper at the buzzer for a 28-26 lead.

In the fourth period, Red Level took many sizable leads, but Straughn clawed its way back to force overtime.

Straughn got within two points on a three-pointer by Avery Driver. He finished with 18 points. Driver scored 13 points in the fourth quarter alone.

SHS almost made a three before overtime on a shot by Austin Pickrel. Pickrel made his seven points from the free throw line, and J.D. Driver chipped in eight points for Straughn.