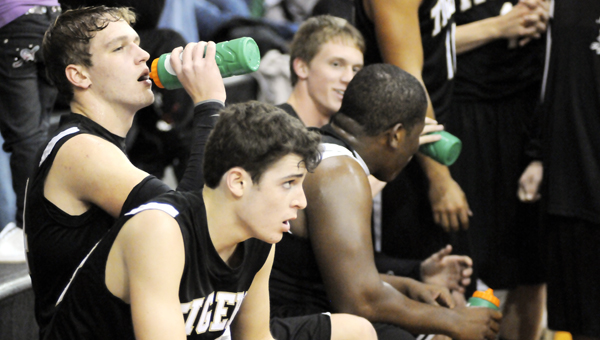 Avery Driver set his game on cruise control, scoring a game high 21 points to help lift Straughn to a 54-47 victory over Red Level on Monday night.

Straughn eliminated any sort of momentum for Red Level in the second half by making clutch shots on the inside and perimeter.

To help lead the charge for Straughn, seniors Austin Pickrel and Giavann Nurse also had a good night for the visiting Tigers. Pickrel sunk in 13 points, and Nurse added 11.

“We finally got the monkey off of our back,” SHS boys coach Rusty Andrews said. “We finally finished out a ball game.”

After a few days of rest for the holidays, Straughn came out and set the tone, keeping the scoring close.

Throughout the first half, Driver was seen either driving to the basket, or making open tres from the perimeter. He made two three-pointers, and scored three jumpers to lead his team with 12 points at half time.

“We got that lead in the first half, and we pretty much maintained it in the third and fourth quarters,” Driver said. “I don’t know, we just held through.”

At the start of the third period, Nurse came out and shot two tres to help his team take a 39-29 lead over Red Level with 2:14 left. And at the end of the third, he made a three-pointer and a jumper that Andrews said were “clutch,” and that it feels “good” to get the win.

“It feels good,” he said. “The kids have worked so hard. They just had to learn how to finish. We’ve been so close in so many ball games. (Nurse) hit a clutch three-pointer and two-pointer at the end of the third and fourth quarter to stop their run there.”

Pickrel was pushed as he made a lay up, causing a three-point play with 46 ticks left in the third.

Straughn kept up its impressive inside game to end the period, taking a comfortable 44-30 lead with one more period left in the contest.

Red Level came out hot at the start of the fourth with two quick jumpers by Nick Dorsey. Dorsey finished the night with seven points.

Red Level cut into Straughn’s lead by five points late in the fourth quarter, where RLS held the momentum it was searching out.

After a couple of turn overs, and a few missed free throws, Red Level’s momentum was nil as Straughn paved its way making free throws in the clutch.

Driver led Straughn in free throws, and was 5-of-6 from the line.

When asked if he knew it was a game high for him, Driver said he was just scoring for the team.

“We won, and the team matters,” he said. “We got over that hump now, and if we can get everybody scoring like they should — our two post players — then we’ll be good from now on.”

Both teams played a tight game in the first half, remaining even at 10-10 after the first period.

“(The shots) didn’t drop at all,” RLS boys coach Allen Catrett said. “We didn’t execute on either end very well. We had a bunch of break downs on defense and were not in the right place.”

Straughn pulled away in the second period, outscoring Red Level 22-11.

Straughn will play LAMP today at 7:30 p.m. in the semifinal round of the tournament. Red Level drops to the loser’s bracket, and will play Goshen today at 1:30 p.m.