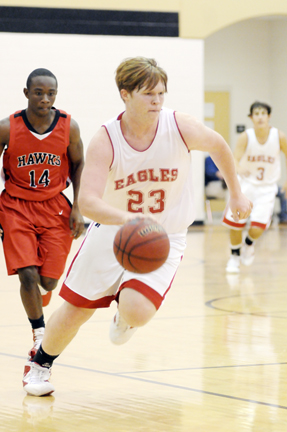 Despite losing two straight at the Alabama-Florida Shoot Out last week, Pleasant Home boys basketball coach Jerry Davis said he learned a lot about his team leading into area play this week.

“I know they both look like defeats, but we should’ve got a lot out of this tournament,” Davis said. “Both (Florida) teams play very good (man-to-man defense). They’re probably as good as we’ll see in our league.”

Cory Sims and Colter Poole led the Eagles in scoring against Laurel Hill. Sims had 17 points, and Poole added 11 points.

Jeffrey Slaughter led the Eagles with 17 points against Baker, and Sims chipped in eight points.

Davis said the shoot out allowed him to figure out what still needs work.

“We saw some deficits and some things we’ve got to be able to do (better),” he said. “We haven’t understood yet that we have to pick to get open. Just moving around doesn’t help out a lot. We’ve got that out of it — I hope.”

“We created a lot of problems,” Davis said. “We’re not finishing it at the offensive end right now. We’ve about got everything down right now to the point where we’re going to get better. We’ve just got to work on those things.”

Pleasant Home will begin its area play tonight at home against Geneva County. The varsity boys will tip off after the girls game at around 7 p.m.

FHS boys fall in shoot out