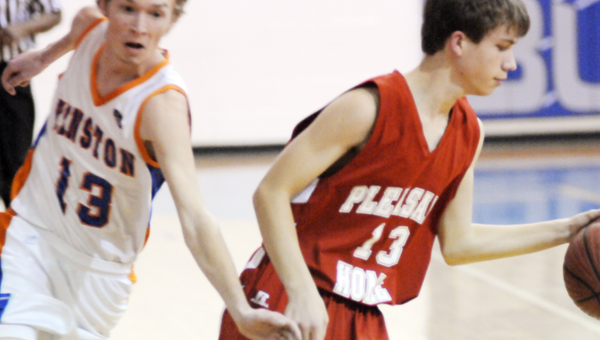 It may not be the best time of year to have homecoming, but Pleasant Home coach Jerry Davis said he hopes his team will be focused on the task at hand when the Eagles play host to area opponent Kinston on Friday night.

“Hopefully we’ll be in the game simply for the fact that they beat us about as bad as we’ve been beat this year,” Davis said. “I don’t really have an answer to it. I’ve been looking at the film, and everything. We just didn’t play real well that night. They made an awful lot of shots, and sunk our boat real quick.”

The game Davis is referring to took place last Tues., Jan. 11, when Kinston beat Pleasant Home 57-28, utilizing its defensive play and offensive inside game to get the win.

Davis said the fan-base needs to be big in order to help his team play with more “intensity.”

“If they do, then I think we’ll be competitive in the game,” he said. “We can’t play like we played against them the last time, and we don’t have anytime to think about the ball game.

“It’s going to be a big ball game because it’s an area game, and if we lose that game, then we’ll be tied with them,” he said. “We’re trying to play for the area tournament — home-court advantage is a big thing in area basketball.”

Probable starters for the homecoming game will be Kaleb Powell at guard, Colter Poole at shooting guard, Sid Newby at guard, with Jeffrey Slaughter and Cory Sims on the inside at the No. 4 and No. 5 positions.

“That’s at the moment, but it could change at practice,” Davis said.

The main focus leading into Friday night’s contest is getting rebounds (getting boards) and making shots, Davis said.

“We shot just about as poorly in (the Kinston loss) game as we’ve shot all year,” he said. “Then, our problem is when we play against anybody with size it’s awful hard for us to not give up second or third shots at the board. We’ve got o be able to board.

“We’ve played some big teams, and kind of got away with it, but that is (Kinston’s) strength,” he said. “They can shoot the ball at perimeter all night. The (Jacob) Free kid is awful hard to contain on the inside. I think he’s capable at playing at the next level.”

Additionally, Davis said he hopes a “big crowd” will turn out for the game.

“We’re just looking forward to having a big crowd at homecoming,” Davis said. “Like I said, homecoming is not a motivator for these kids at the game. I’ve never seen homecoming be a great motivator at the ball game.

The varsity boys will tip off against Kinston at approximately 7:15 p.m. on Friday night.