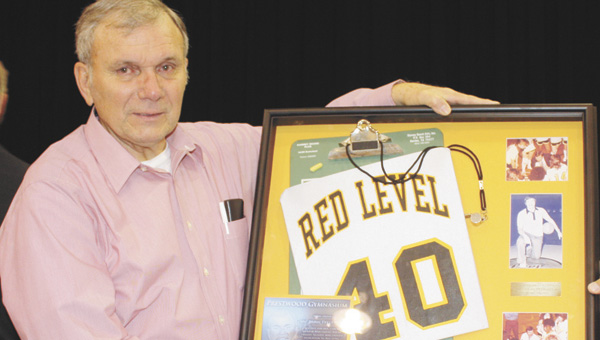 It was September of 1969, and Jimmy Prestwood got his first glance of the gym he’d call home for the next 17 years coaching boys and girls basketball at Red Level.

The gym that had been built in the early 1960s, didn’t look to be in good shape, Prestwood said.

“When I got there, they had a gym that I was going to say looked like a dungeon,” he said. “They had a real dark floor on it — it was one of those floors when you put layer after layer of varnish on top of each other.”

Prestwood came to Red Level after a one-year stint as a basketball coach for the ninth grade team at Florala.

Former RLS principal James Milton approached Prestwood, and asked him to come to the school to coach basketball.

“For a few years, ball play was like a fiddle and not that important really in a football school,” Prestwood said. “It was difficult for a few years.”

Prestwood said the difficulties lie in the fact that many of the players lacked the necessary fundamentals of the game.

“They had never really had organized basketball,” he said. “When you have somebody that just does it because the school principal asks you to coach, and don’t want to do it, it was like playground basketball. You’ve got to start from the bottom, and come back up.”

The 1976 season for the boys was the most memorable, Prestwood said.

“They went to state 28-3 (overall),” Prestwood said. “And during those years, we played Andalusia, we played Enterprise, Elba and Opp. We played all of the larger schools around here we could play. We just played good competition above our competition.”

As for the girls, the most memorable year was 1984, where the team’s only loss came in the state finals, Prestwood said.

It’s 2011, and the gym that housed so many good seasons for Prestwood will always bear his name as the school held a ceremony in his honor Friday night.

“It’s an honor,” he said. “It’s not something I asked for. It’s something my former ball players wanted to do. I think of it like (former) coach (Frank Ray) Garner at Pleasant Home.

“He was my high school coach, and they thought enough of him that they named the gym after him and rightly so at Pleasant Home,” he said. “I’m just honored that they would consider naming the gym after me.”

Prestwood and his wife, Crystell, have two daughters, Debbie Turman of Red Level, and Lynn Newton of Lauderdale County.

After Prestwood was honored, Red Level went on to beat McKenzie, 55-53.

Veterans are welcomed home from the 2010 Honor Flight The date has been set for the next Covington County Honor... read more