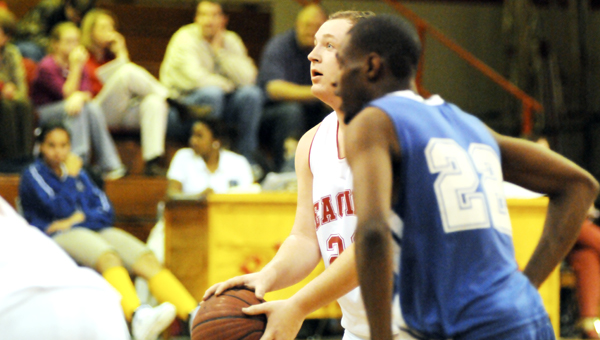 However, Pleasant Home made essential adjustments in the second half, running a better offense and defense to outscore WSN 23-8 in the third period. In the fourth period, a lot of Pleasant Home’s seniors were able to play, and get some minutes in what could be their last game at PHS.

“We pressed a little bit, and got the lead,” Davis said. “We let everybody play. It was a sloppy game overall.

“It kind of was expected, but overall, pretty much except for a few minutes here and there, it was pretty sloppy,” he said.

With this win, Pleasant Home won its seventh straight game. PHS will travel to face Geneva County in Kinston at 6 p.m. Friday night in the first round of the Class 1A, Area 2 tournament.

Pleasant Home (18-9) began its “sloppy” play in the first half, where it only scored 12 points compared to WSN’s four in the first period.

Pleasant Home seniors Colter Poole and Cory Sims took over, combining to score 22 points of their team’s 38 in the second half alone. Poole led PHS with 17 points, and Sims had 14 points.

Davis noted Poole and Sims turned it up in the second half, doing what they always do to help carry the team to a win.

“(Poole) had a couple big threes in the third,” he said. “Cory did a good job of and gave us some inside game. They’re seniors, and that’s what they’re supposed to do.”

While Poole made shots from the perimeter and the free throw line, Sims waited underneath the basket, where he got passes from Kaleb Powell and Lance Davis on the drive. Poole finished the night 6-of-6 from the line.

W.S. Neal didn’t give up in the fourth period, managing to outscore Pleasant Home 19-15, where it made a late run on three-pointers and foul shots.

In varsity girls action, Pleasant Home simply treated their end-of-the-regular-season contest against W.S. Neal as a game that mattered in the 41-27 win.

“We were treating it like it was our first game in the area tournament because we loafed against Straughn the other night (Friday),” Garner said. “We played sloppy, and we were just trying to get into the mindset that we were in an area tournament. We hustled a lot harder tonight I thought.”

To many a crowd member, the varsity girls’ aggressiveness was obvious. The girls used a full-court press throughout the contest, and found their inside game.

The varsity girls will play Geneva County Thursday night at 6 p.m. in Florala for the first round of the area tournament.